doctor who christmas special the snowmen

DOCTOR WHO offers up a freezing cold Christmas extravaganza 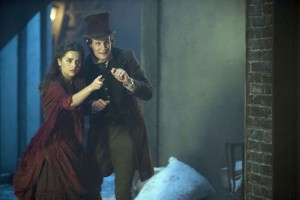 In this year’s DOCTOR WHO Christmas special, “The Snowmen,” the Doctor (Matt Smith) has more or less retired to Victorian London and just wants to be left alone. Friends like Vastra (Neve McIntosh), Jenny (Catrin Stewart), and Strax (Dan Starkey) try to draw out the formerly proactive Time Lord, but it takes a mystery involving deadly, living snowmen to bring back his characteristic curiosity and desire to save people from lethal monsters. There’s also a familiar foe behind this chilling gambit, and a face from the show’s recent past when new companion Clara (Jenna-Louise Coleman) shows up. Hey, wait a minute – wasn’t she just whipping up soufflés as Oswin in “Asylum of the Daleks?” Hmm…

DOCTOR WHO has become less a thrilling adventure in time and space and more an endless cycle of the same tired clichés that show runner Moffat rolls out ad infinitum to the exclusion of character, story, or anything resembling entertainment. Creature that keeps repeating a phrase (the Ice Governess made out of CGI circa early ‘90s)? Check. A Sontaran warrior reduced to a series of unfunny jokes that renders a member of the once proud warrior race that could threaten the Doctor in stories of their own into nothing but a comical sidekick? Check. A fast-talking, quipping girl that immediately wants to get into the Time Lord’s pants? Check. Add to that an obsession with spending more time talking about Moffat’s other big TV project – Sherlock Holmes – and it seems he doesn’t even really want to be working on the show he supposedly loved as a kid. Things that are supposed to be oh-so-clever – the “one word test” – are also insane when you think about the stakes. Threats to a planet, perhaps an entire race, but the lizard is going to play word games? 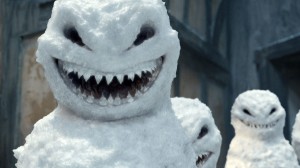 Richard E. Grant might be said to be wasted in his role as Dr. Simeon, but then again all he has to do is stand around, look like he’s falling asleep, and then lurch around in a manner that suggests he studied up by viewing Richard Briers’ groundbreaking performance as The Chief Caretaker in the abysmal 1987 story, “Paradise Towers.” Sir Ian Mckellen lends his voice to the Great Intelligence, which clearly hasn’t lent any of this gift to the script. And although Matt Smith has usually been the most reliable actor in any episode of the show, good or bad, here he seems to go off the rails, making the Doctor far more erratic and unlikeable than usual, and even resorting to the incredibly irritating action movie cliché of cricking one’s neck before heading into battle. And then there’s Clara, another high-concept companion with a mystery. Sounds like a shallow Pond we once knew, and nothing compels me to wonder what her story will be because the likelihood it will make any sense by its end is virtually nil. So now we have “The Girl Who Died Twice” instead of “The Girl Who Waited.” Remember when people just traveled with the Doctor for a while because it was fun?

So why a C- and not the F it so richly deserves? Because the new title sequence, the new TARDIS interior, and the Doctor’s fetching Victorian gear – as well as the wonderful Victorian lab that serves as the Great Intelligence’s base of operations – are all triumphs of set and costume design. It’s the only thing this episode gets right, and it’s a shame that some stunning visual work is wasted on a wafting snowflake of a tale that melts at first touch and is as quickly forgotten.

Series 7 of DOCTOR WHO returns next year, which as any fan knows is a pretty important one. It’s not often a television institution celebrates 50 years of entertaining viewers around the globe, but 2013 is the half-century mark for DOCTOR WHO. With the reinvigorating boost some of the most recent run of episodes has given the show – the last two notwithstanding – and with so many excellent design tweaks as we head into the new year, who knows what’s in store when the TARDIS materializes on our screens again? Let’s just hope it has a story and some characters we can care about that offer more than rapid patter and flat vaudeville routines, or else we might be longing for the bite of a memory worm ourselves.