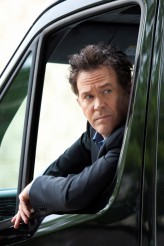 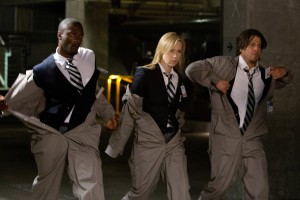 It’s very frustrating that TNT decided to burn off the remaining episodes of Season 5 of LEVERAGE and do very little promotion with it. And then they went and cancelled it last week, with little fanfare.

Even worse,  the series finale aired on Christmas night!

Way to burn off an exceptional action series and make sure few people actually see it conclude properly.

That little bit of anger aside, LEVERAGE wrapped up its great five-season run with many callbacks to the pilot episode with “The Long Goodbye Job,” while also showing how much the team has grown as people.

In many ways, all five characters on the show – mastermind Nate Ford (Timothy Hutton), thief Parker (Beth Riesgraf), muscleman Eliot Spencer (Christian Kane), hacker Hardison (Aldis Hodge) and grifter Sophie (Gina Bellman) – were incomplete and each working through their inner demons and their insistence on being isolated and alone.

When all is said and done, “The Long Goodbye Job” shows how they’ve come together as a team and family with Nate and Sophie serving as the surrogate mother and father and the other the siblings learning to get along (well, maybe that analogy is a little too warped since Parker and Hardison did get together).

Regardless, everything you would want out of a LEVERAGE finale is here. There are several double crosses, a major fake-out and a return appearance by the Leverage teams’  recurring nemesis Jim Sterling (Mark Sheppard). 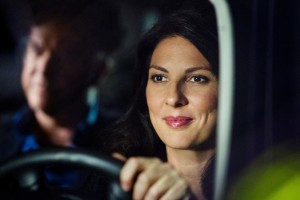 The episode starts off with a potential case that piques Nate’s interest – a boy, needing a drug that will save his life, is being denied coverage. This echoes Nate’s own personal tragedy with his son who didn’t get an important drug that could have save his life (and ultimately cost him big).

Hence, the con is on as they try to break into an impenetrable building. Before they escape, Parker, Hardison and Eliot are all killed in a horrible way and Nate (with Sophie as a passenger) drives the getaway van off a bridge.

We believe he is the only one that survived, but this is LEVERAGE. There is no way they would kill off the characters for real in the finale. It just isn’t going to happen.

Nate is apparently under arrest and in a mental facility where he tells his story, but he’s playing them all along – he knows where he is (in the INTERPOL office of the building they broke into) and his capture is part of the con.

It also brings Sterling out in the open and, SPOILER ALERT, he actually helps Nate in the end (they’re even now).

The sick kid was all part of a con (it wasn’t real), the rest of the team is still alive and what they’ve been searching for a file called “The Black Book” which has the names of all the people who sent this country into financial collapse that the government couldn’t prosecute.

At the end, they now have a new mission, a sort of Leverage International as Hardison says because now they can employ new people to help them take down the bad guys. 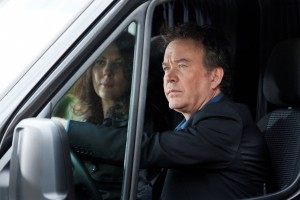 Meanwhile, Nate asks Sophie to marry him (or Lara or whatever her real name is) and says he is out of the game to the others. His job is done. That leaves the kids (Hardison, Parker and Eliot) to rule the roost and carry on as a family Robin Hood business.

And surprisingly, the person taking the lead is Parker, not Hardison (still confused about that one).

Mixing the same expert mix of humor, heart and action, the series finale written by creators John Rogers & Chris Downey and directed by Dean Devlin is a love letter to all the fans who followed the show to this point.

There are echoes of the pilot episode, but there are also great moments of showing how far each of the characters have come. It’s great to see Nate mentoring Parker and the nice moment they have early on in this episode.

Five seasons is way too early to end such a great series. TNT made a big mistake pulling the plug, because clearly there were more stories left to tell – and a solid fan base for it as well.

LEVERAGE was also a show that brought more male viewers to the TNT network and it also attracted even bigger talent since then to come to the network with shows and it was all because of Devlin bringing a feature film sensibility to the small screen.

I guess there’s always the possibility of another network or another outlet like Amazon or Netflix to pick up the series, but at least the creators were wise in wrapping things up in the off chance they weren’t picked up. Knowing there’s some closure (with an open door) is the only way to do things in a modern age of TV production.

Still, LEVERAGE did have five great seasons, and just like CHUCK and FRINGE (five season shows too), in some ways it’s better to go out on top, rather than overstay your welcome. I’ll miss the Leverage team, but at least we know they’re still doing good out there and Nate (at least for the time being) has finally worked through his inner demons and is moving on with his life and finally experiencing some happiness.