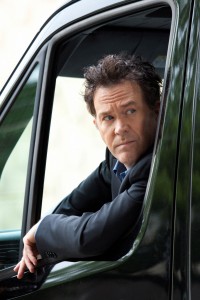 At the Television Critics Association press tour, TNT/TBS network president Michael Wright took a moment to talk with ASSIGNMENT X about the cancellation of LEVERAGE, which concluded its five-year run on TNT Christmas Day, 2012.

ASSIGNMENT X: Why did you decide this was a good time to end LEVERAGE?

MICHAEL WRIGHT: I’m actually happy you asked me this, because it’s never easy to cancel a show. This was the hardest cancellation ever, because [LEVERAGE executive producer] Dean [Devlin] is a friend. We were creative partners on this show. This show was born from a meeting Dean and [series co-creator] John Rogers and I had years ago, and there was just such enthusiasm for the show, and love for the show and what it meant, and then that cast came together and had such a unique and rare chemistry. And the theme of the show, of these really skilled in odd ways people coming together to do something on behalf of the unempowered, those that aren’t entitled, those that need help and can’t get it, a show that trades on that theme speaks right to my heart. And all that said, at the end of the day, it is a business and there is – not a formula, not an algorithm, but there is a math involved, and at a certain point, cost of production and ratings and nature of the audience and trends all begin to make a decision for you, and the show’s ratings had gotten to a place where it just didn’t make as much sense going forward.

AX: But the series didn’t make it to a hundred episodes, so is there any concern about syndication?

AX: Was part of it that the actors had contracted for five seasons, so Season 6 would have triggered raises?

WRIGHT: No, we talked about that. I think that everybody – if there had been a way to bring the show back, we probably would have discussed it. I think you can also say, I don’t think the show was creatively exhausted, but I do think it’s fair to say that it did its job. I think after the number of episodes they ran, I think we got a lot out of LEVERAGE.