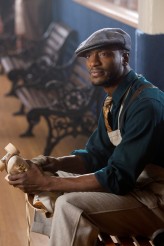 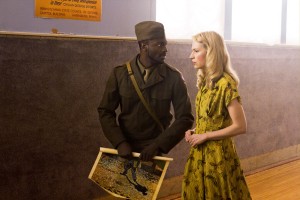 As LEVERAGE wraps up the summer portion of Season 4 (with a return of regular antagonist Jim Sterling played by Mark Sheppard), ASSIGNMENT X chatted with star Aldis Hodge who plays hacker Hardison on the series.

Throughout the course of the TNT series, Hardison has went from wise-cracking loner to someone who is finally accepting that he’s part of a team. He also has feelings for the somewhat closes off Parker (Beth Riesgraf) which has been gaining some traction the past couple of seasons.

Here’s what Hodge had to say about the latest developments.

ASSIGNMENT X:  So Sterling is finally back.

ALDIS HODGE: Yes, Sterling comes back to play in this episode and the team travels to Dubai for this grand chess tournament to take on some terrorists that are in Dubai for a completely different reason. We’re shaking things up in Dubai – doing our Leverage shtick how we do and we’re having fun.

AX: Have enjoyed the different characters you’ve played this season?

HODGE: I loved “The Van Gogh Job” where I got to play an entirely different person. It’s narrated through Danny Glover’s character and they show us being the character’s he’s telling the story about and I play him as a character. So it’s not Hardison pretending to be someone, it’s playing Danny Glover’s character. That was cool, because we had to truly step outside of ourselves and be something different and Beth did an amazing job. She has this whole accent from the ‘40s, because that was time frame we were in. And Gina, Tim and Christian all were amazing as well. We aren’t our characters, so that was interesting to watch.

AX: The season premiere was filmed in a snowstorm – how crazy was that?

HODGE: It was crazy, but it was a heck of a lot of fun. We went up to Mt. Hood [in Portland, OR where the series filmed] and were in the middle of a blizzard. Big ups to the crew who were stuck up out on that mountain for 12 to 13 hours. It was amazing and I had such a great time. It was the first time of being on an actual snowy mountain. It was pretty cool. 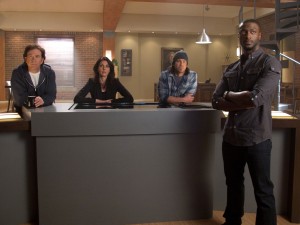 AX:  The Parker/Hardison relationship has continued to evole this season – do you think it’s moving along at the right pace?

HODGE: The relationship with Parker definitely is evolving. They’re not taking it too fast, but they are exploring some more feelings. We see them struggle with it a little more and they’re truly earning what they want. We’re trying to not get there too fast, because we want to give the audience somewhere to go afterwards. If we get there too fast, we’re left with nothing. We’re pacing ourselves and it’s a very comfortable pace – it’s just right.

AX:  Last season Hardison was all about thinking he wanted to have his own crew, where do you think his head has been this year?

HODGE: Honestly, he understands the job, doing his job adequately. Really, his head is between staying focused and staying Hardison.

AX: The cases have been a little bit different this year too.

HODGE: I think we’re doing cases with a little more heart this season. “The Van Gogh Job” is such a beautiful story and Chris Downey did such a beautiful job writing it. The cases really deal with our emotions a little bit more this season. That’s the biggest challenge for us, is being sure we keep our emotions intact. We feel for our clients in a different way this year.

AX:  THE CHICAGO CODE was such a great series, and it was great seeing you a guest star on it.

HODGE: Going to another set  you never know what the world is going to be. I had a very good time on that show. I was very happy to be able to work with Jennifer Beals, because I’ve been a fan of her for a very long. And shooting in Chicago brought back some memories because we shot the pilot of LEVERAGE in Chicago. I had a great time on the show and the entire cast was really top notch. And one of the other actors, Matt Lauria, was another FRIDAY NIGHT LIGHTS alum, but he came on during the closing of the series, and I was on the series the first season. We were able to laugh about that. I do remember it was like a Thursday and they were having lobster for lunch just because. That was pretty nice. 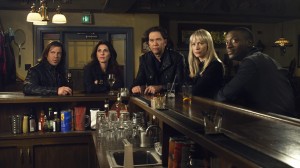 AX: You’re doing more episodes of LEVERAGE  this year than you’ve ever done before – do you like getting more time to live and breathe Hardison?

HODGE: I want to work until I’m tired, and I’m nowhere near being tired yet. You can keep the work coming.

AX: How is your watch company coming?

HODGE: I’m having weekly having conversations with my factory. I have a prototype I should be getting back soon and if all goes well with it, then I will see where the next step is. I’m very excited for the promise of what’s to come with my company. Right now, like I said, it’s a lot of wait. All of the work I could possibly do up until this point is done. I’ve put in the designs, get everything set up and ready to go, and now I just need to wait for the watch and unfortunately you can’t rush that. I’m impatient as all hell – so it’s killing me.