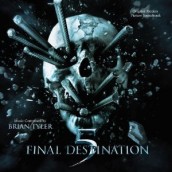 Death wasn’t proud when it took Shirley Walker after her three, mordantly thrilling scores to the FINAL DESTINATION saga.

And though its fifth verse is the same as the first, Walker’s black-humored approach has been continued with telltale, twisted finesse by Brian Tyler, who joined the franchise with entry four.

Even with all those numbers, the series has arguable found its best footing since the original with five, buoyed on by Tyler’s bombastic approach that plays each ghastly Rube-Goldberg gore wind-up with the freshness of the series’ first death. Beginning with a rock guitar and orchestral head banger that throws every FD instrument of destruction at us in 3D, Tyler has delicious fun with the utter sincerity of these completely uninsurable characters, giving suspenseful pathos to their plights before his raging score jumps in to pierce, splatter and incinerate.

Where body count horror soundtracks of this type usually were happy to chow down on abrasive percussive effects, what’s always distinguished the DESTINATION scores is the strong, symphonic cunning to their kills, a melodically macabre tradition that Tyler continues to smartly carry on for Walker, whose own, ever-developing style is also reflected in Tyler’s approach that combines strong themes, percolating samples, wildly accelerating rhythms and a full-bore orchestra. Paying tribute to the dearly missed Walker with smart quotes of her original DESTINATION theme, and once again packing a Varese CD with 70 minutes of music, Tyler has Death go out with a bloody good bang here.

Click on link: To buy the FINAL DESTINATION 5 soundtrack