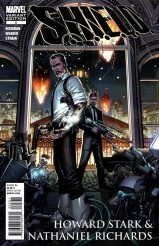 Interest in keen in the ABC pilot for S.H.I.E.L.D., the ABC/Marvel show from executive producer and co-creator Joss Whedon about the organization featured prominently in Marvel Comics and in Whedon’s summer blockbuster THE AVENGERS.

Speaking to the press on Thursday at the Television Critics Association winter press tour, ABC Entertainment Group president Paul Lee had this to say on the subject.

“I talk about the emotion of the network, that it’s smart with heart,” says Lee. “There is something which I talk less about that’s very, very real
about this network, and it’s real for. ONCE [UPON A TIME], which is, we have more co-viewed shows [series viewed by families together] than any other network. The question over here partly is why we have more stringent broadcast standards. I think we have something like eight of the top 20 co-viewed shows on television, and in there [are] THE MIDDLE and NEIGHBORS, the top co-viewed comedies, AMERICA’S FUNNIEST HOME VIDEOS, obviously ONCE top co-viewed, SHARK TANK. These are all the top co-viewed shows in the country. And, absolutely, Marvel has the ability to bring the whole family around it. The truth about Joss is he has some great relationships in it. So there are a lot of really funny male/female relationships, some very flirtatious ones that go through it. But it’s also Joss, too, and it’s Marvel, and there’s a lot of action to it. So we haven’t yet seen the pilot. We fast-tracked that before the others. We are going to see it a lot earlier than the others. And we are very hopeful that that’s going to move forward to series, and we will build our marketing campaign early for it.  We do see that as a possibility of a show that we can bring both men and women and kids to. And by the way, the script is great. So I don’t want to jinx it because that may not mean a good pilot or a good series, but we are very excited about it, and Joss is wonderful to work with – and by the way, thrilled to be on television, which I’m enjoying.”