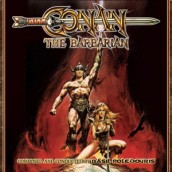 What is best in life? How about getting just about every note of one of the greatest film scores ever written, as spread over three CD’s for 1982’s score to CONAN THE BARBARIAN. Ever since the 1982 CONAN THE BARBARIAN LP on MCA (also included here), just about every label from Varese to Milan has been trying to solve The Riddle of Steel with fits and starts of additional music, most recently with an admirably inclusive re-performance by Tadlow Records. But it’s Intrada that has gloriously mustered the full scope and lusty power of the Might that is Poledouris, his operatic work finally singing with all of the Prokofiev-like glory that so wonderfully influenced his barbarian score to rule them all.

Where just about every film before and since CONAN that had a guy in a loincloth swinging a big sword offered a slightly condescending attitude towards its source material, it’s a measure of the epically serious solemnity that writer/director John Milius gave to Robert E. Howard’s creation that allowed Poledouris to unabashedly play CONAN as the stuff of heroic myth, a la Prokofiev’s score to ALEXANDER NEVSKY. Better yet, Milius was unafraid to leave long passages of Conan’s quest for vengeance all but silent in his travelogue across the Hyborian Age, giving Poledouris the space to not only flex his muscles in the service of music as pure storytelling, but also as a way to hear the poetry inside of a monosyllabic barbarian’s mind. Beyond showing that he could turn the lush melodies that filled THE BLUE LAGOON into blood and thunder, Poledouris also proved that Cimmeria was indeed the musical birthplace of Russia. Slavic rhythms, ethnic music and chanting choruses accelerated battles into violent, joyful dances, or sensuously laid the groundwork for an attack on a cannibal orgy. But beyond showing his love of the landmarks of 20th century orchestral music in his swings between the lyrical and the primitive, Poledouris also drew on the theme-drenched style of Miklos Rozsa that infused the likes of EL CID and BEN-HUR, giving CONAN the kind of musical grandeur that’s almost unimaginable today, and continues to remain unmatched.

It’s long been told that Poledouris was unhappy with the sound of the two Italian orchestras that first recorded CONAN. But the music sounds terrifically vibrant here, or at least way better than what Jerry Goldsmith got when he recorded INCHON in an Italian wine cellar. Not only does CONAN offer the complete score, but over twenty minutes of alternates as well, with Nick Redman offering a heartfelt liner note tribute to the lasting impact as one of film scoring’s great, unapologetic melodists who could wield the sword of the symphony like few others in the business of pop culture myth-making.

Click on Link: To Purchase the CONAN THE BARBARIAN soundtrack