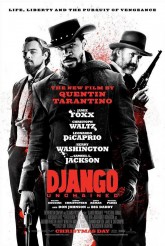 If you’re old enough to remember crazy indie ‘70s Westerns, or at least have seen them on video or at revival houses, you understand the kind of movie experience writer/director Quentin Tarantino is addressing with DJANGO UNCHAINED. As with everything Tarantino does, there’s a sense of film history/film commentary, as if a friend is sitting next to you saying, “Remember this movie? Remember this moment in this movie? Wouldn’t it have been cool if this could’ve happened? And then that happened because of this? And then those led to this other thing? And then …” That’s a big part of Tarantino’s aesthetic, and if you remember the movies he’s referencing here – which look to be everything from Sergio Leone’s canon to some infamous exploitation flicks – you can speculate on the jumping-off points. However, you don’t need to know anything about earlier works in the genre to appreciate the part-parody, part quite-serious epic that Tarantino has wrought here.

A title tells us that it’s two years before the U.S. Civil War. A line of chained black men are being forced along by two none-too-bright white slave traders. A white German man (Christophe Waltz) driving a dentist’s wagon crosses their path, introducing himself as King Schultz and wanting to know if any of the slaves worked on a plantation where the Brittle brothers were overseers. One of the slaves, Django (Jamie Foxx), speaks up. Shortly thereafter, the slave traders are dead, their prisoners are unchained and Django and King have entered an agreement.

King, it turns out, is a very shrewd bounty hunter, in immediate need of identifying his next quarry (that would be the Brittle brothers) and in the longer term, also open to having a professional partner. Django, now that he has his freedom, wants to find his wife Broomhilda (Kerry Washington), who was taken from him and sold to another plantation after the couple tried to escape together. King is moved by Django’s story, likening it to that of Siegfried and Brunhilde in Germanic legend, and vows to help. The quest leads the men to Candyland, the plantation owned by the notably vicious slave owner Calvin Candie (Leonardo DiCaprio).

In broad strokes, things work out about the way we’d expect, with righteous rage, blood fountaining up into the air at regular intervals and tons of terrific signature Tarantino dialogue. (Trust him to come up with a whole riff on a drawback to being a Klansman that nobody has mentioned before.)

The filmmaker also brings in a lot of historically accurate horrors of slavery – there’s no GONE WITH THE WIND nostalgia here. These sequences are meant to be disturbing to watch, so much so that the psychological effect of witnessing the cruelty motivates a key action in the latter portions of the movie. They are very effective. How well one responds to DJANGO UNCHAINED in large part depends on how well one can weather the swift changes in tone, from smart-ass talk to exuberant action to grievous brutality and back, many times over. There are also a lot of racial epithets, one in particular, in the dialogue. Granted, a lot of the characters are overseers, but some of it registers as overkill.

The actors, including Don Johnson, Walton Goggins, Ato Essendoh, James Remar, Dennis Christopher, Michael Parks and many other strong character names, all appear to be having a great time, with the exception of Foxx. Granted, Django has plenty of reason to be intent and unhappy, but while he’s impressive and in fact acts like a ‘70s indie Western hero, he doesn’t seem as fully connected with his costars as he could be – excepting leading lady Washington, with whom convincing sparks are struck.

Tarantino clearly recognized what he had in Waltz back in INGLOURIOUS BASTERDS (as did just about everyone, including the Academy) and has here written the actor another role worthy of his talents. This time, Waltz gets to use all that urbane charm, shrewd observation and modest manner concealing lethal skills in the service of a good-guy character, to such an extent that the movie deflates a little when he’s absent.

DiCaprio is wily, courtly, self-assured and every inch the villain that a story of this size demands. DeCaprio plays Candie with the calm certainty of a man who is sure he’s got right on his side. Samuel L. Jackson, almost unrecognizable with white hair and bushy eyebrows, is extremely good, vanishing into the character of Candie’s ultra-loyal valet.

The musical score is eclectic, to say the least. It makes sense that there are selections from star Foxx and famed Western composer Ennio Morricone, but when the Jim Croce folk/pop ballad “I Got a Name” accompanies a traveling montage, it’s clear that not only is Tarantino referencing the ‘70s (the style of the film and the titles emphasize this), but he’s reveling in everything about the era, including its filmic anachronisms.

DJANGO UNCHAINED goes off on a number of tangents. A lot of them are entertaining, but a few are just odd (among the latter is a sequence with Tarantino as an Australian). Unlike, say, PULP FICTION or even INGLOURIOUS BASTERDS, DJANGO UNCHAINED doesn’t have a tangle of interwoven plot threads – by the end, there’s a sense that the movie could have been tightened a little and not lost any of the elements that make it work.

Still, if you are a Tarantino fan, a ‘70s Western fan, a fan of any or all of the actors involved or even just want a bloody, rousing, disturbing, crazy time at the movies, DJANGO UNCHAINED is here to provide it all.