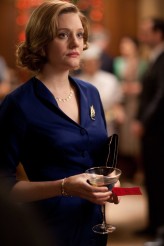 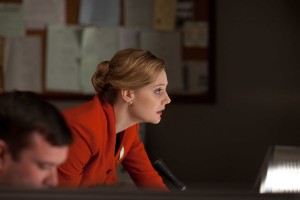 In THE HOUR, now in its second season on BBC America, Wednesdays at 9 PM, it’s the late 1950s. Romola Garai’s character Bel Rowley, who lost her job as producer of the news show “The Hour” at the end of Season One, has been reinstated. Her former lover and current problem associate Hector Madden (Dominic West) has been her anchorman but seems to be moving to another network, while erstwhile best friend and key investigator Freddie Lyon (Ben Whishaw) has returned with new wife in tow to take a news anchor job. They’re all neck-deep in a new mystery.

Garai, a British actress who was born in Hong Kong, has film credits that include ATONEMENT and AMAZING GRACE, along with some filmed Shakespeare. She also played the title role in the BBC miniseries EMMA. At a party thrown by BBC America for the press, she steps outside so she and a reporter can hear themselves talk about the changes THE HOUR’s Season Two has wrung in Bel.

ASSIGNMENT X: Before Season 2 of THE HOUR, had you done anything that had gone to a second season before?

ROMOLA GARAI: No. This is the first series television that I’ve done since I was seventeen. The first-ever job I did was a TV series in the U.K., but it was very small – it didn’t go to America or anything, and I had a really tiny, tiny part in it, so this is I suppose my first real experience of doing a second series.

AX: When you did the first season of THE HOUR, were you thinking in terms of “Should I hold anything back in case we go again,” or were you startled when you went to a second series?

GARAI: I had no idea what to think. I worked very much on the principle that we would only do it once, so I didn’t think strategically about the story continuing at all. I knew that Abi [Morgan, THE HOUR’s creator/show runner] had mentioned that she would like to do another series, but because I’d never been in this situation before, I had no sense about whether or not that was likely or not. So I just treated it as though it was a one-off, and then when they said, “We’d like to do it again,” I was of course really excited and happy to do that.

AX: Can you talk about the changes in Bel in Season 2?

GARAI: She’s much more confident in her job. The insecurity about whether she’s capable or not in her job, whether or not she has the confidence and status to be able to do her job is a real talking point in Series 1, and that isn’t the case in Series 2. I think Abi’s worked much more from the premise that [Bel] is absolutely head of the news team. She’s very capable. She’s been running it for a long period of time without Freddie there and so her ability at her job is less of a talking point. But her emotional coldness, perhaps, and her fear of commitment becomes much more the focus of her storyline. 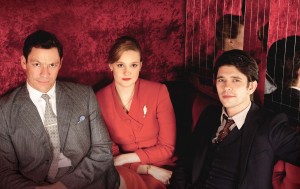 AX: Is Season 1 Bel or Season 2 Bel more fun for you to play?

GARAI: Season 2 Bel. For me personally, I am quite a strong personality and I enjoy playing very empowered characters, and I don’t think this is a good thing [laughs] – I think I’d be a better actress if I was more flexible – but I always want to make all the characters that I play the most powerful person in the scene. Which is terrible for everybody else, but obviously I enjoy playing the characters when they’re quite, quite strong.

AX: Do you have favorite episodes or favorite scenes?

GARAI: I have a couple of favorites. I think the scene at the end of Episode One [of Season 2], when she sees Camille for the first time and realizes that Freddie is married. In Season 1, my favorite scene is the one between Bel and Marnie, when Marnie tells her that she knows that she’s having an affair with her husband. I think Oona [Chaplin], who plays Marnie, is amazing in that scene and it was one of those great opportunities where there was no acting required. I felt sort of genuine shame. It was extraordinary, I think, and hopefully works really well. There’s also another scene that I really enjoy playing, which comes about halfway through, between Bel and Lix [Anna Chancellor], which is really about Lix saying, “If you want to play with the big boys, things are going to be tough. You can’t have your moral righteousness and play with the big guys.” That was a great scene to play, because Lix is such an amazing character and we had a really nice, proper big scene together, which is lovely to do.

AX: The response to THE HOUR in the U.S. has been very enthusiastic. What was the reaction like in the U.K.?

GARAI: Mainly positive. I think audiences really loved it, and in the main, critics were very positive about it. It’s difficult when you write pieces about journalistic heritage, because journalists are going to have strong opinions about it, and so those opinions can be both positive and negative when you’re dealing with the occupational history of the people who are reviewing it [laughs], so we did sometimes have people saying, “Oh, it’s not true to the period,” but as is always the case with drama, it’s impossible to be completely true to the period. And so mainly people were positive about it.

AX: You’re also the lead in THE CRIMSON PETAL AND THE WHITE, which ran as a miniseries on Encore this summer and is now out on home video …

GARAI: THE CRIMSON PETAL AND THE WHITE is based on a novel by Michel Faber. It’s a contemporary novel, but it’s about aLondon prostitute in the 1860s and her desire to try and free herself of the life that she leads. She’s also a writer – she’s the author of the novel [within the novel]. She is the authorial voice and through trying to manipulate a client, tries to rise through the social ranks. But really, it’s about how no matter where she is in society, whether she’s working as a prostitute, whether she’s a mistress, whether she’s a wife or a governess, she’s always in the same situation and I think it’s a feminist novel from that point of view.

AX: A lot of the roles you do are in period pieces. Are you drawn to those roles? Do casting directors see something classical in you?

GARAI: I think it’s a combination of things. I think I’m very interested in history and especially literary history, so I’m drawn to those particular kinds of characters. Also, of course, casting directors are more likely to see you in those roles. But also, more than anything, I think most of the good drama in theU.K. is period drama. And I think it is changing, but by and large, our really high-quality dramas are usually period pieces, and that’s a hard thing to completely break free from.

GARAI: I did a film, which is coming out next year, called THE LAST DAYS ON MARS, which is a science-fiction film. It’s directed by a guy called Ruairi Robinson and in the cast it’s Liev Schreiber and Olivia Williams and myself and it’s about a group of scientists on Mars and a space mission that goes wrong.

AX: How was playing someone in the future?

GARAI: You know what? It’s very much like the past [laughs]. A lot of very uncomfortable costumes and I sort of felt like I was doing another period piece.