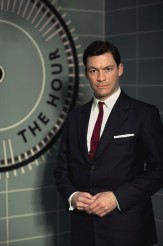 Before the days of TV cable, American audiences got fare made by the BBC on PBS on MASTERPIECE THEATRE and MYSTERY! The shows that turned up on both of these programs were often wonderful, full of memorable characters and fascinating stories and gorgeous period detail. THE HOUR, a six-part series that debuted on BBC America (it just concluded its run in the U.K. on BBC) would fit beautifully on either showcase. Set in the world of 1956 British TV journalism – a form still beset with growing pains – THE HOUR folds in international crisis, murder, love triangles and professional ambition as the protagonists strive to discover what is going on as they simultaneously struggle with how they should present the truth to the public.

We meet news writer Freddie Lyon (Ben Whishaw) as he’s preparing his pitch for a new kind of news series – he’s quite open about his belief (shared by the viewer) that the news of the day is so stodgy as to induce narcolepsy. Freddie wants to see something exciting and honest and immediate on the television. He gets his wish, but not in the way he expects.

The new program, “The Hour,” will be produced not by Freddie, but by his best friend (who he loves in secret) Bel Rowley (Romola Garai). Bel keeps Freddie on as a news writer/researcher, but the network gives her anchorman Hector Madden (Dominic West), who trades on his socially acceptable good looks, charm and class status to go after whatever he wants – including Bel. Meanwhile, the British government is on the verge of a military conflict withEgyptand the murder of a professor is somehow tied to the anxieties of Freddie’s childhood friend Ruth Elms (Vanessa Kirby), who fears that “they” will kill her.

This is a lot to absorb, but series creator Abi Morgan’s script keeps us straight as to who’s who, sounding erudite yet entertaining. The writing is pitched to us, not above us. After a number of shows set in past eras that stick women on the sidelines in the name of historical accuracy, it’s also refreshing to have a few female characters who have direct impact on the plot (which is also historically accurate). How all the pieces fit together remains to be seen, but the murder aspect certainly gets us wondering who knows what about which secrets.

The casting is superb. Garai is very likable as the professionally forward-thinking, personally vulnerable Bel, and Whishaw has a terrific mixture of wit, bile, insecurity and doggedness as Freddie. West is entirely on pitch as the egotistic but engaging Hector. The supporting cast is filled with splendid actors, including Anna Chancellor, Anton Lesser, Oona Chaplin, Ken Bones, Juliet Stevenson and Tim Pigott-Smith, with TORCHWOOD’s Burn Gorman as a very cool killer.

There is something enormously satisfying about knowing that British TV drama/mystery is being done in the present with all the skill, ingenuity and watchability that we remember from the past. Well done, THE HOUR – we look forward to more.