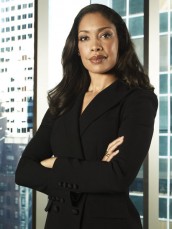 The actress talks about playing the boss, and her continuing thoughts about FIREFLY's Zoe 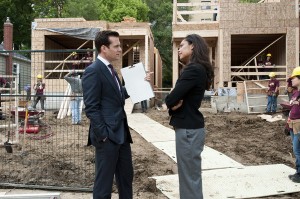 On USA’s SUITS, Thursdays at 10 and already renewed for a second season, hotshot New York lawyer Harvey Specter (Gabriel Macht) takes protégé Mike Ross (Patrick J. Adams) under his wing at the firm. Their little secret: Mike is a brilliant self-taught legal whiz who has never gone near law school, much less passed the bar. Jessica Pearson, the head of the law firm played by Gina Torres, will be much less than pleased if/when she ever finds out about this.

Torres, who has often been associated with very tough women – Zoe Alleyne in FIREFLY and SERENITY, Helen Carter in CLEOPATRA 2525, Cheryl Carerra on the police drama STANDOFF, Anna Espinosa in ALIAS, Cas in THE MATRIX REVOLUTIONS, the people-eating Jasmine in ANGEL and the voice of Superwoman in JUSTICE LEAGUE: CRISIS ON TWO EARTHS – talks with ASSIGNMENT X about getting to play someone who does battle with words rather than fists.

ASSIGNMENT X: When you got SUITS, were you looking forward to doing something where you got to wear a nice wardrobe and not run around kicking people quite so much?

GINA TORRES: [laughs] I was, yes. Actually, I was very relieved that the most dangerous thing I do is walk around in high heels on this show.

AX: Were you specifically looking to do a television series at this time, or is this just what came up?

TORRES: A little bit of both. I was looking to do something that kept my interest, kept me busy, and this came up.

AX: Did you do any research in preparation for this role?

TORRES: No. I think my life experience coming to this point, playing as many powerful women as I have, I think that has served me well, and the writing is really quite wonderful. 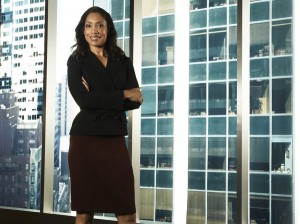 AX: This is going a while back now, but on 24, you played a not-very-powerful woman.

TORRES: No. She was a trophy wife who came undone inside of a twenty-four-hour period.

AX: Was it difficult for you to play somebody that fragile, or did you just think, “Well, this is an interesting change”?

TORRES: No, it wasn’t difficult – it presented its own challenges, but I found her fascinating. To watch her essentially unravel inside of an eight-hour period in real time according to the show, this woman who starts out thinking that she’s got it all and she knows how to use it and then suddenly nothing.

AX: Prior to Jessica, had you played a lawyer before?

TORRES: I have played a lawyer a few times, actually, but certainly not a lawyer who’s in charge. Jessica is a little bit different. Jessica has arrived at the top of the pyramid, and so she’s got a lot to say about a great many things, and she’s in charge and that’s exciting. And it’s also exciting to get to play with this incredible cast that they’ve put together.

AX: And is there a difference in playing somebody who’s in charge rather than someone …

AX: Well, who’s either on her own or following somebody else?

TORRES: I think that there’s a sense of responsibility that you can’t shrug off. I mean, [as Jessica] I certainly mention a few times during the course of the season that it is my firm. And so the crown weighs heavy on the queen’s head, and so the decisions that she makes – good, bad, indifferent – she knows that they have consequences.

AX: Will Jessica find out about Mike’s lack of credentials by the end of this season? 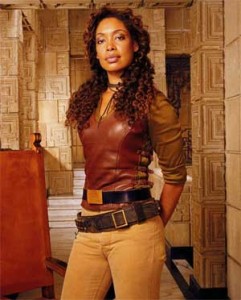 AX: Is there any difference between the vibe on set on SUITS and on other shows you’ve worked on?

TORRES: I have to say, after FIREFLY, I was incredibly spoiled, because the cast and the crew on that show got along so well, and we fell in love with each other so deeply, that I thought that there would never be another occasion for that, and I have to say, these guys [on SUITS] are fantastic. I love them. The cast is great – they’re great people, they’re fantastic actors, and so it’s really lovely to go to work.

AX: Speaking of FIREFLY, do you miss your character Zoe at all?

TORRES: I do. I miss Zoe. I think of little Zoe stories [laughs] and where she would be. And Wash [Zoe’s husband, played by Alan Tudyk] is alive.

AX: Did you ever hear Joss Whedon’s comment that Zoe give credibility to Nathan Fillion’s Mal character as a commander, something to the effect that, “If anyone as tall and strong and honorable as Gina Torres would respect this guy …”

TORRES: That’s fantastic! I never heard that – I love that. Thank you, Joss.