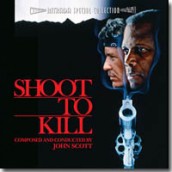 John Scott's on target with a classic action score

Between hearing the classically adventurous vine swinging of Tarzan in GREYSTOKE, vengefully playing Scott Glenn delivering a whole lot of whoop ass in the original MAN ON FIRE, capturing the fury when KING KONG LIVES or hearing the jazzy football ennui of NORTH DALLAS FORTY, the genteel John Scott has proven he certainly knows a thing or two about how to play macho attitudes and the great outdoors, Both factors would figure prominently in one of his most acclaimed Hollywood scores for 1988’s SHOOT TO KILL. Street-smart FBI agent Sidney Potier was the greenhorn when teamed with grizzled outdoorsman Tom Berenger, with both trying to take down a very bad guy roaming the Pacific Northwest.

While there’s a rugged, bucolic flavor in these woods, especially given Scott’s mold in the symphonically naturalistic Vaughan Williams / William Walton tradition, SHOOT TO KILL also ends up sounding as rustic as a gun barrel on a rain-drenched night. That’s due to the hard-broiled, thematic edge of a saxophone that runs through this terrifically exciting score. But then, as the musician whose licks can be heard in the opening of GOLDFINGER, Scott has always shown a talent for playing the instrument at its most dangerously atmospheric tones. Along with electronic percussion, these hard-broiled elements bring the wild film noir vibe of pursuing a metropolitan thug in the great outdoors. Yet there’s much dangerously soaring beauty to be had in SHOOT TO KILL, its bold, brass-driven action bringing images of another forest survivalist named John Rambo to mind. As Scott’s riveting score slugs its way through branches, bears and a psychotic mastermind, SHOOT captures a thrilling scope that’s as that’s as big as all outdoors.

Alternate action cues show Scott at his most untamed, where two Roller Rink source cues offer a fun respite for disco-ish jazz, all while the intrepid Jeff Bond’s liner notes keep entertaining trek of this long-request score. It’s release is yet another boon from Intrada’s venture with Disney Pictures, whose SHOOT TO KILL still stands as one of the most impressive adult entries of their Touchstone Pictures division.

Click on link: To buy the SHOOT TO KILL soundtrack