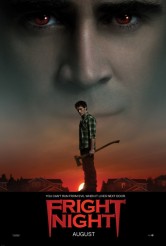 I was too young to see the original FRIGHT NIGHT in theatres when it was released. I saw it like a lot of children of the 80’s, on VHS. I liked the original flick and thought it was fun and I had always loved Roddy McDowell, but I didn’t have any kind of deep attachment to the film. More often than not, when I see that a film is being remade, I switch off. A lot of classic films have no need to be re-made, and usually the new version pales in comparison to the original. Now, having said that, the new version of FRIGHT NIGHT is a really well-done and clever update that is worth seeing even if you are a die-hard fan of the original.

As with any re-make there are going to be differences, in the new movie Charlie Brewster (Anton Yelchin) is actually one of the popular kids and kind of an ass for the first part of the movie. He isn’t the lovable doof that he was in the original, staying up late to watch horror movies.

Jerry (Colin Farrell) who moves in next door works construction on the Las Vegas Strip at night and is pretty damn smoking hot. He’s not the nice guy next door that he was in the original, he’s more of a sexy bad boy, and you more than a little see the appeal to being his next meal.

Peter Vincent (David Tennant) is probably the most transformed character in the new version, and by far the most brilliant. Vincent is a Vegas Strip illusionist (ala Criss Angel) who’s show “Fright Night” is about vampire slaying. Vincent likes his drink, his women, and to swear like a sailor, but he is quite possibly the BEST character in the movie.

The script is really well done by former BUFFY THE VAMPIRE SLAYER scribe Marti Noxon, and there’s a lot of thought that goes into explaining how a vampire would go about living amongst humans in a city like Las Vegas in the middle of a desert. There are plenty of jokes, though the film is not nearly as funny or campy as the original version. Noxon has made Jerry the vampire more of a shark on land, and despite some awkward dialogue in places, he is incredibly threatening. Taking that a step further are the visual effects and make-ups for the film done by the ever exceptional KNB Effects. The vampire looks for the film range from subtle to grotesque and all of them work really effectively. One of the best scenes involves Jerry flopping on the highway like a wounded animal and the entire thing is done in silhouette, which makes it even that much more disturbing.

This film is more along the lines of people knowing Jerry is a vampire and they do their best to escape from him, and try to kill him (not always in that order). The original left Charlie as a boy who cried wolf trying to convince everyone that he wasn’t crazy and that his neighbor was a vampire. There is far less of that in this movie, and that character is more akin to the new version of Ed (Christopher Mintz-Plasse).

The 3-D sequences are quite spectacularly gory, and the audience will more than likely find itself turning away from the flying splatter from time to time. There are not many jump scares in the film, and instead it seems to rely on a sense of building dread and fight or flight.

David Tennant is the stand out character of the whole movie as mentioned above. He spends a large portion of the time in leather pants, wandering drunkenly through scenes dispensing knowledge and cursing (mostly at the beautiful women around him). Seeing the former DOCTOR WHO actor as this character is really just a giggle inducing joy for anyone who spent five years watching him on the BBC series. He steals every scene he is in, and he definitely has to come back in some form or another if they do a FRIGHT NIGHT 2!