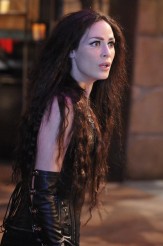 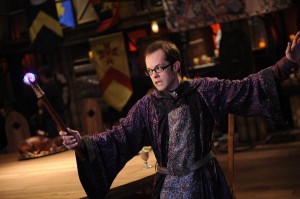 Well, from last weeks’ more serious WAREHOUSE 13 that spanned centuries with one artifact, we move to a somewhat sillier episode this week, “Don’t Hate the Player.” The basic premise is one we’ve seen before on most science-fiction series’, sooner or later, the video game that is some form of immersive virtual reality that is so real it kills. This version for WAREHOUSE is a somewhat lighter version of that concept and no one dies, but it’s still the same idea.

One thing that Syfy does, which I’m sure works for most of the viewers, is crossovers. Like a comic book crossover where you establish that certain characters occupy the same universe. This happens on WAREHOUSE 13 with the show EUREKA. For some reason Syfy decided that these two series occupy the same world. Honestly I watched the first season of EUREKA, but I’ve not been a viewer since, so when they do crossover episodes it sort of loses some interest for me.

I don’t like feeling that a network is trying too hard to make me watch another of their programs by plugging characters from that world into a show I already have enjoyed watching separate and independent from anything else this whole time. Maybe that’s a somewhat cynical way of looking at it, but I really feel like they are trying to pimp another similar show onto the viewer with crossed used of casts. So for part of this weeks’ episode I was taken out of the story.

To that end, Douglas Fargo (Neil Grayston) from EUREKA lands himself in hot water (no pun intended) by combining an immersive virtual reality fantasy game with Beatrix Potter’s teapot, which works as an artifact that not only sends the tea drinker on one hell of a trip, but also forces them to confront their greatest fears. Claudia (Allison Scagliotti) and Pete (Eddie McClintock) head into the game to save Fargo and his pal, and discover that the whole thing is basically a WAREHOUSE 13 game complete with a rhyming host Artie (Saul Rubinek).

The video game portions of the episode are fun and have all kinds of geek humor to them. Pete gets off a lot of one-liners and jokes that only people who have played video games or grown up laying video games will get, so it was nice to expand the geek base for the material a bit more. There are lots of clever in-game jokes as well involving the various WAREHOUSE staff. The only problem with the video game segments of the episode is the filter they used to make it look more like a computer game. The weird almost negative or reverse haze that surrounds everything makes my eyes hurt a bit, and I find it hard to watch for too long.

As usual there is a secondary story in the episode which turns out to be the more serious and the one to have lasting ramifications, as the shadow WAREHOUSE team makes it’s move. Artie and Jinks (Aaron Ashmore) retrieve a Van Gogh painting with the “help” of evil FBI agent Stukowski (Ashley Williams). Agent Stukowski actually uses the painting to deliver a whole army of insect-like robots into the WAREHOUSE, where they begin to wreak havoc and the screen goes black.

So when are we going to find out who the mysterious man in the wheelchair is? I like the fact that each episode this season has its own stand alone cases, but there is this ominous overshadowing conspiracy shadow network scheming against the WAREHOUSE and everyone in it.

Of course, one of the best things about the episode was the “Giles” moment when we suddenly were treated to Claudia on an open mic set at the local coffee house. Allison has a great voice, and she can play too! It’s always kind of awesome when series find ways to showcase other talents that actors have that you might not have seen otherwise.