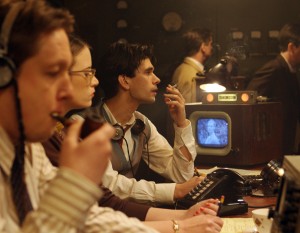 Welcome to THE HOUR, the six-part period political thriller/murder mystery/newsroom drama premiering tonight on BBC America (it just aired in the U.K. on BBC2).

Series creator/executive producer Abi Morgan is an award-winning playwright and screenwriter in her native England; her script about former Prime Minister Margaret Thatcher, THE IRON LADY, has just been filmed with Meryl Streep in the title role.

At a party thrown by BBC America for the Television Critics Association – where the poolside entertainment is a synchronized swimming troupe – Morgan talks about why she set her story in the past and in the world of TV news.

ASSIGNMENT X: Have you always been interested in the Fifties, or did you just think, “When’s the best era for an espionage story?”

ABI MORGAN: I didn’t particularly know the Fifties, if I’m honest. It was suggested to me to look at the Fifties as an interesting period, and then when I looked back at it, there was such an incredible moment of catalyst with the Suez crisis, so that really became the starting point for me, and it’s really exciting. I love the feeling that this was a decade where the country was on the moment of decline and collapse and out of that was coming this new world order, so it just felt like a great period. I think it’s a very British thing. Communism and the fear of Communism becomes a very big thing within the context of THE HOUR, but I think what we were dealing with was a certain post-war austerity and trying to rediscover our identity outside of the Empire.

AX: In the Fifties, people don’t have the staples of modern thrillers – computers, cell phones, tracking devices. Does that make it easier or harder to tell the story

MORGAN: I think that makes it a lot easier, because you can have a slow burn. You can’t just have someone saying, “Can you Google me this name,” or “Can you run a check on this number [license] plate.” I think that not only works in terms of it being a detective story, but I think it works in the emotional unraveling [of the characters]. People don’t meet and sleep with each other straight away, they don’t Facebook and they don’t Twitter. They take time to get to know each other and they spend time and they’re not constantly on their phones. So I think it’s a very, very different society that we’re looking at. And it allows them to investigate. They have to actually do the work – they don’t just Google.

AX: Are there any thriller movies that you find especially exciting?

MORGAN: I love a lot of the Eighties thrillers – I love JAGGED EDGE, I love films that have a twist at the end, thrillers that have a twist at the end. I think in Britain we’ve made some inspirational political thrillers like STATE OF PLAY, THE STATE WITHIN, so I think I was very influenced by that. I was quite interested in political thrillers – ALL THE PRESIDENT’S MEN, which is a reworking of the Nixon Watergate case. I love the idea that actually this [THE HOUR] is a thriller that has historical elements to it. 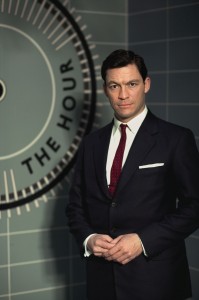 AX: You’ve worked for the BBC yourself as a writer and producer, albeit your work has been drama rather than news, and it’s decades after the period covered in THE HOUR. Are you bringing any of your own BBC experience to this, or is your experience so completely different because of the different eras that it doesn’t apply?

MORGAN: I think the only thing I bring to it is a sense of deadline and a sense of the pressure of getting a story out, and I think that’s really what I bring to it. In terms of the BBC, it’s interesting to me, because I’ve spoken to several people [who] have said, “How do you find the sexism and do you think you still experience that?” I haven’t, but I certainly know what it’s like to be a woman who’s trying to have it all. So there are probably certain parallels, but not with my BBC experience, no.

AX: We’re getting a lot of television shows now that are set in the past, where all the female characters are in subordinate roles, with the explanation that this was the case back then. But you have a female lead, Bel, who is the producer on the news show, and this is historically accurate.

MORGAN: Totally. What was inspiring for me was when I started researching this was that I hadn’t decided what Bel was going to be, I just knew that I wanted a female central character.  Then I found Grace Wyndham Goldie, who was one of the [real-life] leading journalists at the time, but also, she was a producer, really, and she was at the forefront of broadcasting, and she set up shows like PANORAMA and TONIGHT, which were like SIXTY MINUTES. And so I found these women. And of course, predominantly at the BBC, the women were in the typing pool and in the makeup and hair departments, but actually, there were these inspirational women who were producing the shows, and so that was really the starting point for Bel.

AX: All of your three lead actors – Romola Garai, Ben Whishaw, Dominic West – have done a lot of work in feature films. Does this do anything for your production?

MORGAN: Well, I think it does a couple of things. I think you’ve just got actors who are very experienced in working on film and television, so they have an amazing vocabulary in just simply working in front of a camera. I think in terms of their names, I think what’s great is, they’re very eclectic and they’re very different in terms of the audience that they bring. Obviously, someone like Dominic has a huge following from THE WIRE, someone like Ben is an actor with such integrity and you look at the work he’s done with Jane Campion [BRIGHT STAR] and so much of his television work in the U.K. and you know it’s of quality. Romola Garai, she’s like my Lauren Bacall. I think she’s someone who is just absolutely exquisite. She’s just done ONE DAY, the Jim Sturgess movie, but at the same time, she’s done an amazing body of television work. So it was very exciting to get actors who move between two different mediums.

AX: Ben Whishaw’s character Freddie wants the anchor job and doesn’t get it, partly because he’s supposed to be less than photogenic. Of course, the actor is very photogenic …

MORGAN: Yeah, it’s tricky, I know. To be honest, it’s more in [the character’s] own mind. I think [Freddie] is the man who doesn’t realize how gorgeous he is, really. He’s someone who is oddly functioning and yet dysfunctional, and so I think his perception of himself is not actually what he is, which is, he’s a brilliant maverick and he’s clearly beautiful. [Whishaw] as an actor is a chameleon and I think he was brilliant at being able to kind of turn on a sixpence and be both someone who was infuriating and provocative, but also at the same time, I hope through the series you see [Freddie] grow up and develop into more of a man, really. 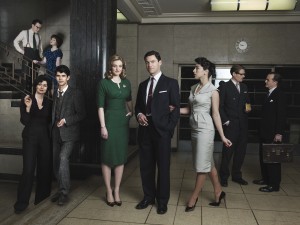 AX: If THE HOUR is picked up for a second season, when would it be set in relation to the current season?

MORGAN: I think nine months in the future, and that’s because when I decided to explore big historical events, I was really interested in the launch of Sputnik, the birth of CND [the Campaign for Nuclear Disarmament], the anti-nuclear movement, and also the kind of racial tensions that were happening near ’58 in Notting Hill, so I liked the idea of a fusion of three very different sort of news stories of the time.

AX: When you get into the racial issues, is Bel going to have any kind of fellow feeling about, “These are people who, like me, are having a hard time getting ahead within the status quo”?

MORGAN: I think what I quite like about potentially going into an area of shifting [society], the arrival of a new culture, new immigrants, is that actually it sort of throws up what it feels like to be a minority and I think there are probably parallels with Bel’s story with that.

AX: Besides IRON LADY, do you have any other projects going on?

MORGAN: I’ve just worked on a couple of feature films. I wrote a film called SHAME with the director Steve McQueen, [starring] Michael Fassbender and Cary Mulligan, and I’ve just done an adaptation of BIRDSONG, which is the Sebastian Faulks novel, which is going to be aired on BBC1 in January.

AX: And you’d said you like things that have twist endings. Should we be looking for a twist at the end of this season of THE HOUR?