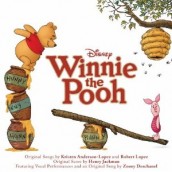 With Zooey Deschanel's voice and Henry Jackman's rambunctious score, there's lots of musical honey to be had

The charm’s the thing as Disney makes a welcome return to the animated innocence of A.A. Milne’s Hundred Acre Wood with WINNIE THE POOH. Just because something’s as cute as a well-worn plush animal doesn’t mean that some new musical fluffies can’t be put into this tubby little cubby, especially when you’ve got Gen X darling Zooey Deschanel giving an enchanted new spin to The Sherman Brothers’ beloved theme song.

The magic that the legendary Disney duo put into the tunes of Pooh (along with the likes of MARY POPPINS and THE JUNGLE BOOK) is wonderfully present in the house of this new enchanted neighborhood, courtesy of the musical team of Kristen Anderson-Lopez and Robert Lopez, who turn the seditious children’s songs of his “Avenue Q” into the real deal here. The cutely growling “Tummy Song,” and Tigger’s rambunctiously roaring “It’s Gonna Be Great” have a throwback vitality that does the Shermans proud, while the mock-scary back and forths of “The Backson Song” nicely comes across as a number that somehow didn’t make THE NIGHTMARE BEFORE CHRISTMAS. But leave it to Deschanel’s golden voice to truly convey the Pooh enterprise’s sweetness as she turns “Everything is Honey” into a bear’s siren-song fixation, while also proving herself an equally capable Doo-Wop singer alongside the clapping beat of “So Long.”

Henry Jackman’s score is no Eeyore slouch either, bringing to ear the nostalgic strains of original POOH-centric Disney composer Buddy Baker. After coming off the visceral superhero scores for KICK-ASS and X-MEN: FIRST CLASS, you can hear how nice it is for Jackman not to kill anyone as he does a spot-on recreation of Baker’s glistening, gently playful style from Pooh’s previous romps, while also bringing real scope to Hundred Acre woods. And even though the Backson is as threatening as an un-comprehended word, Jackman manages to put surprising (though none-too-serious) menace into this imaginary monster and the hullabaloo he inspires in Winnie and Friends, all while interpolating the inimitable Pooh song, Deschanel’s honeyed voice, and the Lopez’s own melodies throughout his score. It all makes for a POOH score full of intoxicating nostalgia for baby boomers and their own piglets alike.

Click on link: To buy the WINNIE THE POOH soundtrack