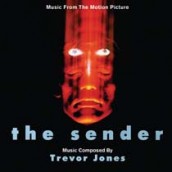 Ever since his mystical synthesizers conjured the fog that King Uther rode on to begat Arthur in EXCALIBUR, composer Trevor Jones has had a distinctive charm of making for walls of hypnotic sound, their haunting, yet gently rolling sustains and siren voices for such scores as DARK CITY, ANGEL HEART and HIDEAWAY leading to some dark epiphany on the other side of reality.

In the case of 1982’s THE SENDER, Jones’ ghostly melodic washes are the eerie visions that a young mental patient projects onto those unfortunate enough to be in his range. While there are any number of jarring effects to be had among the bloody bits and raging fires that imaginarily emanate from THE SENDER, what truly impresses with Jones’ second Hollywood effort after EXCALIBUR is just how beautiful his thematic phantasms are.

Spectral bell percussion, glistening synths, female vocals and a wistful flute and horn become gently poetic brainstorms, as much as they do unnerving nightmares. It’s mesmerizing, otherworldly tone that would also fill Jones’ far more renowned score to THE DARK CRYSTAL that year, firmly establishing him as a truly unique musical fantasist, capable of invading any listener’s mind with his hypnotic, undulating mélanges of orchestra and electronics.

Click on link: To buy the THE SENDER  soundtrack