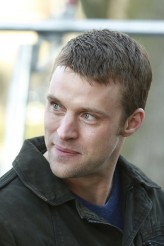 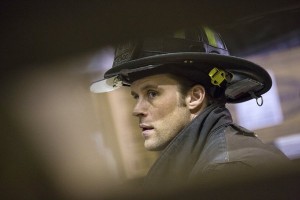 On NBC’s CHICAGO FIRE, currently running Wednesdays at 10 PM and just picked up for a second season, Jesse Spencer plays Windy City firefighter Matthew Casey. Casey has a lot going on at all times, what with a romantic quadrangle going on, his desire for revenge against a local criminal organization and of course literally putting out fires.

Viewers of CHICAGO FIRE and Spencer’s previous U.S. series, HOUSE, where he played Dr. Robert Chase for eight years, would never know the actor hails from Australia. He does a terrific American accent when portraying American characters, but when talking about his work at a press event thrown by NBC at Pasadena’s Langham hotel, Spencer’s deep Australian tones ring clear and true.

ASSIGNMENT X: When you were first on CHICAGO FIRE, was there any thought of letting you use your real accent?

JESSE SPENCER: No. There is that exchange program that they [the Australian and U.S. fire departments] do, but that’s specifically with bush fires in California and Australia. So they have an exchange program, but not Chicago.

AX: What is something that you’re just really excited for fans to see?

SPENCER: [Casey’s] girlfriend comes back. His ex-flame comes back and rekindles his relationship and then – I wish I could be more specific but I can’t, but basically, he takes a crazy turn and there’s a roller-coaster ride and Casey goes on the revenge trail, which turns into these massive action sequences. There’s so much going on, and him being paired with [police detective] Voight [played by Jason Beghe] in this unlikely team – there are a lot of gray areas in it, and there’s a lot of action, and they’re going to finish out the season more or less with cliffhangers and giving each person an arc and a storyline which is going to resolve something or leave it hanging for the next season.

AX: How did you feel when you first read in the script that Casey is out for vengeance?

SPENCER: To be honest, I was excited about it. I love the physical stuff. I think that’s what the show has offered me that I didn’t get in HOUSE at all – it was so cerebral for eight years that it was good to chase someone down. It’s great – I’m really enjoying the physicality of it. I mean, it’s nothing without the character element, but I think they play to both really well. But obviously, in a show like this, toward the end of the first season, it’s going to be a high-octane finish for sure. 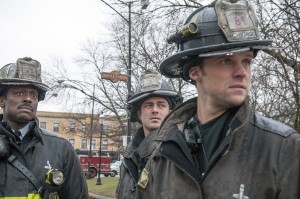 AX: Now that you’re playing a fireman, do you have a different reaction than you used to when seeing first responders and situations that require them on the news?

SPENCER: Yeah. A lot of [firefighters] – they’re a community and so they all know each other and when stuff happens, they tell you. A few months back, our chief fire consultant came in and he usually wears a white shirt and he had a bit of black on his collar, and I was like, “Have you been working?” He was like, “I just came from a fire – we lost a three-month-old.” It’s real, because it’s right there and they’re telling us where they’re coming from and where they’re going to and who their friends are. I’m sure they know a lot of the guys out inBoston [responding to the bombings of the Boston Marathon]. I know they know some of the cops out there. So we have inside info into the first responders at those sort of situations.

AX: How do you feel about Casey’s complicated personal life?

SPENCER: That’s going to be a long-running arc, which is nice. I think an arc like that should be played out – they don’t want to burn it out too quick, so that will be heading into Season 2, I think. It’s been really nice having the situation with Mills [Casey’s romantic rival played by Charlie Bennett] as the candidate under Casey, yet there’s an attraction between Casey and Dawson [Mill’s current girlfriend who is Casey’s ex, played by Monica Raymund], and is that affecting their relationship, or is he able to separate that and be professional about it? It’s kind of nice to watch the interplay between the professional and the personal.

AX: Of the physical stuff you have gotten to do this season, what’s been the most challenging?

SPENCER: I did a big sequence trying to bust someone out of more or less a metal cage. It was a fourteen-hour shoot, and wearing seventy pounds of gear and busting down doors – I can’t tell you how hard it is and I can’t really put it into words, but every time I’ve run out and ripped my mask off and I talk to the firefighters, I’m like, “How do you …?” Because I’m starting to get claustrophobic – I think I’m starting to get worse, not better – but it’s really, really tough. We experience probably a tenth of what [real-life firefighters] experience in a real situation, so you can’t help but really have respect for those guys and what they do. They do amazing stuff.

AX: What do you do to prepare for those kinds of scenes?

SPENCER: Everyone’s really fit. We all box together. We actually hang out with the cops as well. The cops and one of the a.d.s on our show do the Golden Gloves, so we’ve been training with all the cops. There are days when you’ve got the gang-bangers and the cops all training together in the gym. So we’re all pretty physically fit to start out with, so it’s a matter of learning, knowing the equipment and techniques and having the fire consultant there on set to make sure that we’re portraying it correctly.

AX: What is something that you would like to do in Season 2 that you haven’t gotten to do just yet?

AX: Did you play hockey in Australia?

SPENCER: I literally had a fireman come up to me and, listen, Chicago loves our show, they really do. I know it’s always difficult for people of a certain vocation to watch their vocation being portrayed on screen, but that fireman was literally like, “Hey, thank you for portraying us in such a great light. It’s the heart of the show – you guys really capture it – the heart of it is amazing. Thanks.” It made me feel really good, that he felt that we were capturing the heart and soul essence of their community. That feels great.