The creator, exec producer and network exec talk about the crime thriller series 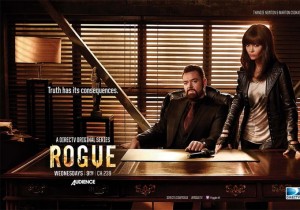 ROGUE, Wednesday nights on DirecTV, follows former Oakland undercover cop Grace, played by Thandie Newton, who becomes so obsessed with finding the killer of her child that she’s taken off the force. With no badge, Grace goes back to her old false identity within the local mob run by Marton Csokas’s character Jimmy to uncover the truth.

At the Television Critics Association press tour, ROGUE has already had its cast and creators question and answer panel in the main ballroom at the Pasadena Langham Hotel. Now ROGUE’s creator/supervising producer/creator Matthew Parkhill and executive producer Nick Hamm, both British, are hanging out in the hotel’s Tap Room with DirecTV vice-president of entertainment Patty Ishimoto. They are happy to answer a few more questions about their crime thriller series.

ASSIGNMENT X: Was ROGUE created for DirecTV or did it exist as a project and then DirecTV picked it up?

MATTHEW PARKHILL: I had the idea and I went to Nick in London and talked about the idea that I wanted to do, Nick said, “I want to come on board,” and then his company commissioned a script and I wrote the script. In its original incarnation, it was a project with the BBC, as a three-parter with Thandie – Thandie was always involved. And for whatever reasons, it didn’t go, and then Nick said to me, “Do you want to transfer it to the States and see if we can set it up there?” and I jumped at the chance, so we did an American version of the script, and then Nick sought out Direct and got it set up.

AX: What had to be changed in the story in order to set it here?

PARKHILL: Funnily enough, the story didn’t change. The first American draft was made very non-specific locale-wise, location-wise. The actual story didn’t change a lot. And then we were looking for a city in America in which to set it. We were very conscious of where great American shows are being set, crime shows in particular are being set, in which cities, and we didn’t want to repeat that. And actually, it was Patty who in one of our meetings who suggested Oakland, and then we started to look into Oakland and that fitted into all the elements of the story. We were looking for a dockside place, because Jimmy’s empire is built around the docks, and that’s kind of how the whole thing came together.

AX: Do you shoot in Oakland?

AX: And it’s now a ten-part series, as opposed to the three you originally pitched to the BBC?

AX: Did you add subplots when it came to DirecTV? How did it go from three hours to ten hours?

PARKHILL: It expanded. I think when Nick went to the BBC, we never told them, “There’s no way in hell I can tell this story in three hours,” because there was too much material. And so in a way, there was always more material than we had time for. But it allowed us to develop other characters, to go into other storylines and to let the show breathe, basically. Instead of it being just fast-paced, it allowed it to become more of a character piece, as well as a thriller, so it just allowed the whole piece to breathe.

AX: Is ROGUE the most ambitious project that DirecTV has made so far?

PATTY ISHIMOTO: [laughs] Absolutely, yes. This is our first true original series. Matthew brought it to Nick, Nick brought it to me, I read it. There was so much going on in the pilot episode that I read, I was blown away. I called Nick, he came in, we talked about it a bit more and I think we knew pretty much from the get-go that it was something that we wanted to pursue.

AX: Was DirecTV specifically looking for a thriller type of show as its first self-produced drama series?

ISHIMOTO: Yes. Definitely a series that had a premium [cable] feel to it. We like to let creative [writers and producers] do what they do and create and there was just a lot of intellect in the writing. Our audience is very sophisticated, they want to be challenged, and we felt that this was perfect.

AX: Did the tone have to become more American in any way?

NICK HAMM: No, we didn’t have to make it more American, we just had to tell the story in America. What Patty said is right – that channel attracts a very sophisticated, thriller-based audience. They want thrillers that are challenging and interesting and involve them. And I think what happened was, you know as well as I that these things happen because there’s a moment in time when there’s a market for them. And what Matthew created, I was able to take to Patty and say, “Look, you can build something here, you can build a brand, you can create your own first show and this show could be as good as any of the thrillers on American television.”

ISHIMOTO: I didn’t feel like there was a lot of change – really, once we settled on the logistics and where it was going to be based and the docks and the environment, everything really fell into place.

PARKHILL: For American readers – like Sabrina, one of Nick’s execs, works on it and she obviously read it and also, I worked with a lot of cops. We spoke to cops in Oakland, we spoke to cops here, I spoke to a cop in New York to make sure the American side of the police element of the show rang true.

AX: How much of a difference does it make in the story to have the cops all be armed? In England, most police do not have guns.

PARKHILL: Oh, you can tell an entirely different story, basically. On the flyover, I was watching this British film called THE SWEENEY, which is a remake of this hit cop show in the Seventies and Eighties, and those cops were all armed, but they’re not armed in London. To get an armed unit out, you have to call them out. They don’t just walk around with guns. So that takes a huge liberty with the true. So in America, the cops are armed, and so the stakes are immediately higher. So it makes a huge difference in terms of what you can do dramatically.

AX: Production-wise, did you have a lot of trouble matching Vancouver to Oakland?

AX: There is a large African-American community in Oakland …

PARKHILL: And not in Vancouver. You’re correct about that, but we employed every single [African-Canadian actor in the city].

AX: And how did you arrive at the casting you have?

PARKHILL: Thandie was someone I always [wanted to play Grace].

HAMM: We all wanted Thandie. She was involved right from the start. Matthew and I both wanted her, and when we started to put it together in America, we went, “Okay, great,” and Patty was the same. Great actress, fantastic presence, intelligent, has a brand of her own – she’s a unique actress. She’s beautiful and she can act, she has a following and you can build a show around her. It’s very rare you can find people that do that. And then we put in Marton [Csokas] opposite her. And then a lot of the cast came through a traditional casting route. We searched high and low and we did a lot of casting sessions. We were pretty immediate when we found the people that we wanted.

AX: Do you have any American actors?

AX: What was the shooting schedule?

HAMM: We shot the whole thing in about three-and-a-half months. We ended up with sort of six and one [days per episode].

AX: Is that about the same time it would take to shoot ten episodes of another cable network show?

HAMM: Well, no. HBO would give you ten, twelve, nineteen days [to shoot per episode], AMC would give you – look, there are constraints. We had a budget, we had a fixed amount of money that we had to deliver the show on, and sometimes that produces its own creative limits. Sometimes you have to finish the scene. You can’t come round again. So it was a tight schedule.

AX: Is ROGUE funded by DirecTV?

ISHIMOTO: And EOne. EOne is Entertainment One. They’re the U.S. arm of [a company that is] mainly out ofCanada. EOne is a studio as well as a distributor.

So it’s a co-production with EOne and DirecTV.

HAMM: They just bought the studio Alliance Atlantis as well.

AX: Is there anything you would like to say about ROGUE?

PARKHILL: Just that we’re very proud of it, it’s a joint partnership between all of us, and bluntly, it’s f***ing brilliant.

HAMM: And also that bars are good places to do interviews.