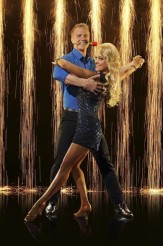 The Bachelor is denied a rose on DANCING WITH THE STARS. Sean Lowe with partner Peta Murgatroyd is cast off the show in week eight, just one week shy of the semi finals. It was time for him to leave and start making wedding plans while the final five get back to hard work for the semi finals.

Ironically, the only other celeb who could have possibly gone home before Lowe was Ingo Mademacher who, with partner Kym Johnson, was named first safe to relax early in the show. The encore went to the perfect scorers of the night Zendaya Coleman & Val Chmerkovskiy, featuring Gleb Savchenko. Then, Coleman & Chmerkovskiy were told they too would be going to the semi finals. After Brooke Burke Charvet interviewed Kellie Pickler & Derek Hough about the big discrepancy between the judges’ votes on their trio routine we saw Jason Derule rule the dance floor.

In a video segment the couples voiced their choices for the viewers’ pick for next week where the fans get to choose what dances the final five will dance. Then, we saw just what dance match ups were picked: Pickler & Hough got the Flamenco (even though Pickler can’t pronounce it). Mademacher & Johnson gladly received the Charleston while Coleman & Chmerkovskiy were thrilled to get Hip Hop (probably because Coleman dances that every week on her TV show SHAKE IT UP). Afro Jazz was picked for Aly Raisman & Mark Ballas and Jacoby Jones & Karina Smirnoff received the Lindy Hop.

An adorable little videoette on Mademacher’s son Peanut (why can’t they do more fun things like that?) preceded an amazing Macy’s Stars of Dance featuring Hough and partner in a rotating stage seemingly dancing on the ceilings, walls and floors. It was just an incredible sight to see.

Emell Sande sang before Raisman & Ballas were third to be safe while Lowe & Murgatroyd were the final couple in jeopardy. Let off the hook, finally, were Pickler & Hough before the inevitably came…Lowe was out.  Stay tuned!

Profile: BURLESQUE star Cher takes five on singing, acting and being i...
TV Review: LONGMIRE - Season 1 - “An Incredibly Beautiful Thing”
Exclusive Interview: Being one of THE NEIGHBORS is alien to Simon Temp...
DORKING OUT ABOUT TRAILERS - Episode 4: STAR WARS: THE LAST JEDI and T...