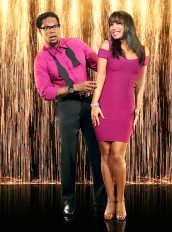 DANCING WITH THE STARS Season 16 Recap: D.L. Hughley gets the last laugh on DWTS before the boot

Another star is eliminated

Sometimes they get it right on DANCING WITH THE STARS: The Results, tonight was one of those nights. After some tough criticism from the judges, D.L. Hughley, with partner Cheryl Burke, makes his final curtain call on the show. He survived for five weeks, even though he placed last nearly every single week, so really, there was no other place to go than home.

Still, in a strange show opener we were transferred into space in a unique popish number with the pros, choreographed by Derek Hough and Mark Ballas. Then came the results – Kellie Pickler and Hough were safe but Ingo Mademacher & Kym Johnson were in jeopardy. After a hilarious video segment of camera confessionals was cut way too short. Now, why can’t we see more of that and less of Kerli, who performed later in the show? I’d rather see the people who are actually on the show than musical guests I’ve never heard of.

Anyway, moving on, the encore went to Jacoby Jones & Karina Smirnoff along with Maks Chmerkovskiy & Anna Trebunskaya. How could they not give it to Jones…he practically begged for it the night before. Plus, he did well with his Jive, so why not.

Head judge Len Goodman had a silly side by side segment and a pep talk video that also seemed pointless before we heard the news – Zendaya Coleman &  Val Chmerkovskiy were safe. However, Victor Ortiz & Lindsay Arnold were put in jeopardy.

A surprising performance by The Band Perry was a nice little treat. Never having heard of them, I was glad to be introduced to The Band Perry.

Third safe were encore dancers Jones & Smirnoff and 4th safe to dance again were Aly Raisman & Ballas. A quick aside about the team dances coming next week with Pickler and Coleman as team captains proceeded Kerli’s performance and then Selena Gomez took the stage in a more theatrical than substantial number.

More highlights led to the fifth and sixth safe couples – Sean Lowe & Peta Murgatroyd and Andy Dick & Sharna Burgess. That left Hughley & Burke in jeopardy. In no time it was official, Hughley was gone and eight were set to dance.