The season finale is here and who killed J.R. is finally revealed 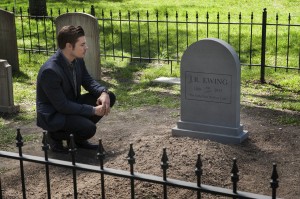 Well, they wrapped it all up on the DALLAS season two finale, but boy did they work hard to make it fit. The problem is it didn’t fit as tidily as it deserved to fit. The end of J.R.’s master plan is complete and yes from beyond the grave he made them pay…boy did he make Cliff Barnes(Ken Kercheval), in particular, pay! And who did his bidding…you better believe it – the good ol’ boy Mr. Bobby Ewing (Patrick Duffy).  Not only did Bobby frame Barnes for J.R.’s murder but he has the whole household believing that Barnes did in fact kill his brother, including Pamela Barnes (Julie Gonzalo), Cliff’s daughter who is now married to John Ross (Josh Henderson).

I know it’s a lot to take at once but that isn’t even half of what went down in the finale. So much happened with Ewings, Barnes and Ramoses flying back and forth to Mexico, there seemed to be some kind of time lapse going on, and yet it worked. John Ross successfully got Pamela to turn on her dad and frame him while sweet little Emma (Emma Bell) helped her mother (Brenda Strong) nail her dad Harris Ryland (Mitch Pileggi). No love for those two fathers who both ended up in bright orange jumpsuits behind bars while the Ewings played the players and upped their game, a move that would have made J.R. proud. Bobby stepped into his big brother’s shoes for a time being and did what had to be done to save the family business.

The result is karma – you get what you deserve. Still, being led astray with the Pamela Ewing story was a big disappointment. I knew they weren’t going to have Victoria Principal grace us with her presence but still, there was a small part of me just hoping she would appear, perhaps in honor of her dear departed friend Larry Hagman. But, alas, it did not happen. Instead, we took a detour into another Barnes subplot to keep the Ewings from getting any stake in his company.

So, who killed J.R.? Well, J.R. did, sort of. It turns out he had only days to live and went to Mexico to finalize his “master plan” for his family to actually complete. His dear old friend went with him and pulled the trigger for him but it was he who devised his demise, days short of God’s plan to take him. It was always on J.R.’s terms and he did it when he wanted to and how he wanted to. It was an honorable way to let the character go and to honor Hagman. But in the end, did they disservice the legend of J.R.? Maybe, after all they took from him his dastardly reputation and gave him a great big heart full of love for his family. He took care of them in the end and well, as much of a bad guy as he was, J.R. was always a family man. RIP J.R. Ewing!