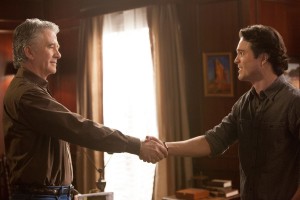 The passing of J.R. Ewing has proven itself to be bittersweet. Yes, we lost the most infamous villain in television forever but, boy did it open up a bevy of story lines for DALLAS. Most noticeably it left a gaping hole where he once stood. Wasting no time at all,  “Prey” features Cliff Barnes (Ken Kercheval) and Harris Ryland (Mitch Pileggi) stepping up their devilish plots to take the Ewings down, taking full advantage of J.R.’s demise and quite possibly coming in to fill that hole.

The episode also suggests other interesting things to come. Will Victoria Principal actually come back as Pamela Barnes? It now seems possible with hint after hint of her being sought after by J.R. before his death. Why? Who knows, but what we do know is there is more to this than meets the eye. And we ain’t seen nothing yet. Perhaps Principal has reconsidered joining the cast. Maybe, they will just recast her. Whatever the future may bring it was about time that they acknowledged her existence in a more reasonable fashion. So now Christopher (Jesse Metcalfe) decides to continue the search for his mother who left him at the age of seven. Metcalfe plays Christopher calm and cool until he actually crosses a line most never thought he would. As John Ross (Josh Henderson) tells him, “Welcome to the dark side.”

The Ewings, inevitably, sit down for a reading of J.R.’s will and discover he left almost everything to John Ross and to Sue Ellen (Linda Gray), who in the throes of depression starts hitting the bottle again. She is fighting a losing battle and without help she is likely to go down quickly. Gray evokes the Sue Ellen from years ago — sneaky, manipulative and, yes, an alcoholic so seamlessly and effortlessly it’s as if very little time has passed.

The cousins play nice, no doubt temporarily, working together to thwart off Barnes Global who is taking full advantage of a compromised Ewing Enterprise. In fact, Barnes is playing so dirty in this episode he may have actually done something no Ewing has ever done before, not even J.R. This begs the question — who will fill J.R.’s shoes? It seems, not one man can, but between the scheming Barnes and diabolical Ryland (Pileggi is just soooo good being bad) they can definitely muster up some chaos for the Ewings, who, for now, stand united.