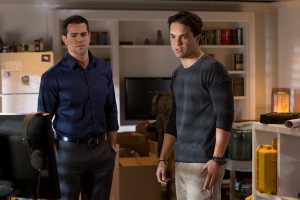 Finally! It’s getting good again on DALLAS. After a two week plunge into mediocrity, the suspense, drama and high standards of the series are back with vengeance.  Annie’s (Brenda Strong) sentence hearing has everyone rooting to get her a light punishment for the shooting of her ex Harris Ryland (Mitch Pileggi). Meanwhile, John Ross (Josh Henderson) pushes Sue Ellen (Linda Gray) to take back her shares in Ewing Enterprises because of a clause in the contract, involving Elena’s (Jordana Brewster) ne’er do well brother Drew (Kuno Becker).

Pamela (Julia Gonzalo) and Christopher (Jesse Metcalfe) agree on a settlement, giving her 10 percent of the company which makes her dear old daddy very happy. That’s all Cliff Barnes has ever wanted, a take in Ewing Enterprises and now through his daughter, he has one.

The cousins are at it again when Christopher discovers John Ross’ plot to take control of the company and the two go head to head with Sue Ellen, Bobby (Patrick Duffy), and Elena looking on, only they’ve soon got company. The drug lord who escaped prison shows up at their door with a few friends of his demanding that Christopher give him his proto-type for a natural form of energy that Christopher created. If not, Elena and others will die.

Poor old Annie is left alone to hear the wonderful news, that she has been given probation. Elena begs John Ross to tell her why he set her up to be taken down by his mom and he simply says, “You broke me heart. The day you stopped seeing the good in me is the day it all died.”

Alas, all are saved on the ranch thanks to the cousins actually, somewhat, working together and Drew, unexpectedly showing up and killing the bad guy, releasing the others from his clutches. Will this bring the family together? Yea, right! Not a chance. Their bonding moment lasts only for a day. The next day Sue Ellen and John Ross prepare to take their share in the company while an assumingly giddy J.R. (Larry Hagman) stays out of sight.

The show is back on track…so good I didn’t want it to end. The hour was too short. DALLAS is back on top and going strong….the momentum has started, now hopefully they can continue the journey without any unfortunate detours again. Next up, J.R.’s final curtain call.