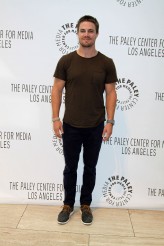 There’s nothing overly terrible about “Dodger,” a competent ARROW episode that features James Callis (BATTLESTAR GALACTICA’s Gaius Baltar), playing a sadistic jewel thief who’s nicknamed “Dodger” because he forces others to commit his crimes by controlling them with explosive collars, thereby dodging the law enforcement response himself.  (Now that I think about it more, though, isn’t it sort of dumb that the cops gave this guy a nickname that highlights their own inability to catch him?  That wouldn’t exactly put the public at ease, right?  And also, why give a jewel thief a very non-specific nickname that you could otherwise give to any criminal who doesn’t get caught right away?  How about a nickname specific to jewel thievery)?

Anyway, I got sidetracked a lot by questions like these during “Dodger,” so maybe that’s the real story of this episode?  The jewel thief story works overall and the episode itself doesn’t feel ridiculous, but there were plenty of modestly ridiculous events that popped out enough to push “Dodger” gently into the ranks of ARROW’s strangest episodes.

“Dodger” begins with Dodger forcing an anxious security guard to steal a giant fake-looking ruby that would be more at home as the MacGuffin in THE GREAT MUPPET CAPER, and it doesn’t exactly get “Dodger” off on a very serious foot.  Aside from the quest to stop the jewel thief before he steals again, there are two storylines in “Dodger” that advance ARROW’s continually unfolding mysteries.

Moira Queen (Susanna Thompson) enlists the help of the recurring villain China White (Kelly Hu) to kill Malcolm Merlyn (John Barrowman), her superior in the criminal conspiracy she’s ensnared in.  Presumably Malcolm’s death will give her the freedom to leave, and also some hope of getting her husband Walter Steele (Colin Salmon) back from wherever he’s being held captive.  We also learn for the first time that Moira’s intentions when she joined the conspiracy may not have been so dastardly.  “We started this to fix The Glades,” she tells Frank Chan (Chin Han), another co-conspirator who seems to share her belief that they’re in over their heads.  We’ve heard the word “gentrification” tossed around before on ARROW, in reference to “The Glades,” Starling City’s toughest neighborhood.  With this, and ARROW’s fondness for Robin Hood imagery, one gets the sense that the major conspiracy that unites the show’s villains is one borne of class conflict that got way out of hand.

We also spend more time with Younger Oliver Queen (Stephen Amell), back on Lian Yu island, although, appropriately, not near as much as last week.  Slade Wilson (Manu Bennett) is developing gangrene from a bullet wound and the only medicine that will help is back in the cave Yao Fei (Byron Mann) had been hiding in earlier.  Oliver goes to get the medicine and encounters a mysterious man who has been beaten and tied up, and who pleads desperately for his help.  Does he take the risk of helping a stranger, whose story seems somehow too convenient, when he’s in a vulnerable state?  He decides not to, and leaves the guy in the cave.  This decision forms present-day Oliver’s secret shame from his days on the island, and it would make Oliver’s character more interesting if ARROW’s creators never returned to these events for a clear resolution, and never let Oliver off the hook from this guilt.

Those moments were interesting, but the were more or less overwhelmed by several other emerging trends that felt false or weird, or otherwise took me out of the moment.  Among them:

Pretty People:  We’re getting close to hitting a critical mass of cast attractiveness where it’s now a distraction.  (I don’t think this fact bothers any executives at The CW, however).  Detective McKenna Hall (Janina Gavankar) returns, now apparently a Detective on the Major Crimes squad, although about a thousand times hotter than any of her counterparts from THE CLOSER.  Also, we get the introduction of Roy Harper, (Colton Haynes), who steals Thea Queen’s (Willa Holland’s) purse in the early part of the episode.  It turns out Roy’s not a budding villain, however, and is apparently Thea’s budding love interest.   I did a little eye roll when this character was introduced, though.  He’s a mugger with a heart of gold who looks like an underwear model.  Those exist, right?

Product Placement:  Ever thought about buying a Microsoft smart phone or tablet?  Because the cast of ARROW sure has!  In fact, they use these devices to solve crimes at a rather robust clip these days.  You should check them out.

Weird Dates:  As part of a dare, Oliver asks out McKenna Hall in exchange for John Diggle (David Ramsey) finally asking out Carly Diggle (Christie Laing), the widow of his late brother.  These two date nights are shown parallel to one another as they both go down like the Hindenburg.  Over dinner, McKenna asks Oliver about his past, especially what he was doing for five years while stranded on an island.  Oliver is unwilling to talk about it, (and her questioning motivates the flashback to his secret shame over not helping that guy in the cave).  His stonewalling upsets McKenna, however, and she leaves the restaurant in a huff.

Huh?  Is her character this much of a jerk?  She’s a police Detective, so presumably she knows what Detective Lance (Paul Blackthorne) learned about Oliver several episodes back – that he was tortured and his body is covered with scars from his time on the island.  But even if that’s not the case, doesn’t a reasonable person understand why being stranded on a desert island for years after a shipwreck that kills your father and others might be a sore subject, and maybe not something you want to grill a guy on during a first date?

Also a head-scratcher was the fact that Carly Diggle gets upset when John Diggle brings up his late brother on their date, and also storms off, offended.  How is he not supposed to bring that up, though?  That’s a hell of an elephant in the room.  If that topic’s off limits, maybe don’t agree to go on a date with someone who shares your last name?  This whole storyline also left me cold because the romantic tension between these two had been on a slow burn since the series premiere, and it would have been better if it stayed that way.  “Dodger” brought things to a head between them too quickly, and anti-climactically, and cheated the audience out of having that tension resolved in a more interesting manner.

Suffice it to say that “Dodger” ends with both Oliver and McKenna, and John and Carly, overcoming their disastrous first dates and forging ahead with their respective romances, but neither of these relationships feel that compelling anymore.  Oliver also catches the jewel thief after chasing him through the streets of Starling City (Vancouver) on a dirt bike, which is pretty cool.  So “Dodger” ultimately doesn’t disappoint, but at different times it mildly irritates and confuses, and I’m hoping future ARROW episodes don’t suffer from this same strain of general weirdness.

Exclusive Interview: William Forsythe on THE MOB DOCTOR and THE BRONX ...
TV Review: BONES – Season 11 – “The Cowboy in the Contest”
Movie Review: PETER RABBIT
THE GOOD PLACE: D'Arcy Carden chats about all things Janet and the fin...