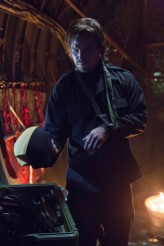 A madman kidnaps Laurel, and Diggle’s investigation into the origins of “The List” brings Oliver closer to the truth about his mother. 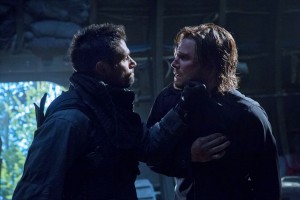 On the plus side, this week’s ARROW episode takes great strides in building towards the confrontation between Oliver Queen (Stephen Amell) and his mother, Moira (Susanna Thompson) we’ve all been waiting for.  On the downside, as a stand-alone episode, “Betrayal” feels utterly generic in every other way, and doesn’t do anything else that makes a particularly strong impression.

Cyrus Vanch (David Anders), a standard issue bad guy, is released from prison at the beginning of “Betrayal.”  His first act as a free man, (after stabbing his former lawyer to death), is to speak in a very hackneyed manner about how he wants to rule the Starling City criminal underworld, now that the Hooded Vigilante has thinned the competition for him.  Vanch’s release puts him onto the radar of crusading lawyer Laurel Lance (Katie Cassidy), who wants him back in prison as soon as possible.  Fortunately she still has the cell phone that contacts the Hooded Vigilante in case of emergencies, and she takes the opportunity to enlist the mystery man in her quest to bring Vanch down.

Meanwhile, the residents of Starling City seem to be falling into different camps with regards to how they view the vigilante, with more people in high places falling into the pro-vigilante camp than before.  This is rough news for Det. Quentin Lance (Paul Blackthorne), who believes the “Hood Guy” is a killer and needs to be taken down, but is in danger of being taken off the case because the higher ups don’t want the vigilante caught just yet.  But Lance’s trump card is that he’s bugged the cell phone his daughter uses to call the Vigilante so that he can overhear their meeting being planned and show up there to make an arrest. (And apparently bugging the phone was necessary because there was just no way to get the vigilante’s phone number out of the contacts list and trace it?  Or maybe I just don’t understand cell phones).

In any event, the attempt to arrest the vigilante fails, but not before we get another scene where Laurel stands a few feet from her ex-boyfriend, now clad only in a hood that covers his eyes, and is unable to recognize him.  Apparently the fact that his height, weight, build, and race are the same as Oliver’s, and his voice isn’t too far off either, was not enough to overcome the fact that Oliver was standing in a strategically placed shadow at the time, and was thus undetectable.  After Oliver escapes arrest and flees the scene, Laurel argues with her dad, then with her current boyfriend, Tommy Merlyn (Colin Donnell) who, we now learn, also falls into the stridently anti-Vigilante camp.  He’s mad at Laurel for blowing off their date to go meet this guy, who Tommy believes is the “ultimate rule-breaker,” and the kind of guy Laurel is normally drawn to, giving us a window into his insecurities about her.  We also find out that Tommy is not a fan of TOP CHEF for some reason.  Probably he’s just venting because he knows it’s just a matter of time before ARROW cuckolds him in a fairly embarrassing manner.

“Betrayal” also follows John Diggle (David Ramsey) and his attempts to prove to Oliver that the reason Moira had an exact copy of her husband’s list of his criminal associates is because she’s involved in the same conspiracy that he was.  Oliver refuses to believe it, but Diggle gets proof.  After taking over for Moira’s regular chauffeur, Diggle is able to follow her to a meeting with Malcolm Merlyn (John Barrowman) and record their conversation through a wall.  While the audio file he retrieves ultimately convinces Oliver his mom is involved in bad things, he still struggles with his willingness to believe the worst about her.  Neither Oliver nor Diggle seem particularly concerned with who the other voice on the tape is, however, which seems like an oversight.  The fact that Tommy Merlyn’s dad appears to be the leader of a criminal conspiracy would presumably be of some interest to them, right?

Also, “Betrayal” gives us a few more flashbacks to the island, where the plot continually thickens, and maybe not in a good way.  Younger Oliver’s escape from Edward Fyres (Sebastian Dunn) via his own faked death allows him to follow the map given to him by Yao Fei (Byron Mann) to the wreckage of an airplane, (in case this subplot wasn’t already enough like LOST for you).  There he encounters Slade Wilson (Manu Bennett), who is on the Australian Secret Service and is (or was) partners with Deathstroke (Jeffrey C. Robinson), (whom no one actually refers to as “Deathstroke”), and the two of them are (or were) on the island to free Yao Fei from Fyres’s prison camp, even though Deathstroke now seems to be torturing people on Fyres’s behalf at the prison camp, and also it’s apparently not really a prison camp.  This is all very confusing and makes me think that I should pay less attention to it.  I remain cautiously optimistic about this island storyline, however.  I appreciate seeing Oliver in real danger, trying to survive the threat posed by all these mysterious, malevolent forces that currently are more powerful than he is.

And why do I appreciate that so much?  Well, probably it has to do with scenes like the one in “Betrayal’s” finale, where present-day Oliver (in the hood) must enlist the help of his arch-nemesis Det. Lance to go save Laurel, who’s been kidnapped by Cyrus Vanch and is being held hostage at his mansion, surrounded by dozens of henchmen with automatic weapons.  This is the exciting climax the episode has been building up to, but ARROW seems in such a hurry to get through with Laurel’s rescue and move on to the coda that they essentially make Oliver invincible in this scene, and he shoots all but one of the gun-toting goons with arrows before they ever lay a finger on him.  When the final goon captures Oliver, Det. Lance dispatches him quickly, and the scene is over.  This all takes a minute or so of screen time, and it barely pays off the otherwise clever conceit that Oliver required Lance’s help or else he couldn’t complete the mission. What was built up to be a daring rescue attempt against long odds plays out as basically an afterthought and ends with a whimper.

One of ARROW’s biggest faults thus far is its refusal to take more time and have more fun with scenes like this, and ultimately that’s what left me cold about “Betrayal.”  While I appreciate that ARROW isn’t wasting lots of time in lieu of engaging with its central mystery, (the nature of the criminal conspiracy engulfing Moira), I would happily move slower on that front if it meant more effort went into crafting tense, quirky, or scary action sequences.  And, unfortunately, we haven’t seen too many of those from ARROW in a while.