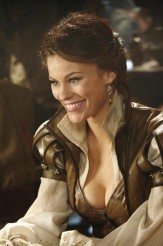 Emma and Gold are off to find his son, but Cora brought The Giant with her and he wants Emma 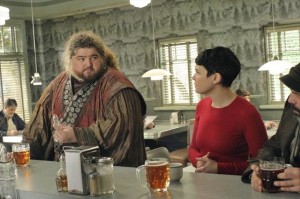 How to sum up this episode of ONCE UPON A TIME? There’s a lot going on and stories are starting to come together. Oh, and Jorge Garcia is back as the Giant – who turns out to be called “Tiny” because compared to his brothers he is. So let’s just start at the beginning and slug our way through.

So in Storybrooke, Emma (Jennifer Morrison) and Henry (Jared Gilmore) are packing to go with Mr. Gold (Robert Carlyle) to find his son Baelfire. Only Mr. Gold didn’t know that Emma was bringing Henry, but she’s not leaving him in town with the evil Cora on the loose, and really, can you blame her? So Gold agrees and off they go.

Ah, but Regina (Lana Parilla) shows up at the door wanting to see Henry. Unfortunately, Snow (Ginnifer Goodwin) and Charming/David/James (Josh Dallas) aren’t as nice as they could be when they remind her that Emma doesn’t need to run anything past her regarding Henry. But they are very nice about letting her know that she’s no longer under suspicion of killing Archie, mostly because Archie’s not dead. I just have to wonder was that really Regina at the door – Cora’s pretty good at making herself look like anyone she wants.

Still, off she goes and Snow and Charming go off to find Cora and run into Hook (Colin O’Donoghue) instead. Accompanied by Grumpy/Leroy (Lee Arenberg), they get Hook to lead them to his invisible ship. Once again, Leroy gets the best line – asking if the ship will sail back to The Enchanted Forest. Apparently not. More importantly, they find that Cora has brought the Giant from the beanstalk earlier this season, reduced in size.

So now we flashback to the Giant’s castle where Daddy Giant Arlo (Abraham Benrubi) is having dinner with his kids, including Tiny (Garcia), who is also known as Anton. Seems Anton catches a lot of grief because he is the smallest and also the most curious about the humans that the giants have long learned to distrust. So he goes down the beanstalk to find out for himself.

Back on Hook’s ship, Snow and Charming wake Anton and Anton immediately goes after Charming, claiming he owes Charming big time. Only Charming has never seen this guy in his life. Ah, but there’s another Prince who has who looked remarkably like Charming – his twin that was killed early last season in “The Shepherd Boy”.

That Prince wasn’t exactly the most charming kid on the block. We see him back in The Enchanted Forest messing around with a very lovely young woman, we later learn is name Jack (Cassidy Freeman). They’re sent to take care of the giant hanging around on the outer borders of the kingdom.

But back in Storybrooke, Ruby (Meghan Ory) visits Belle (Emilie deRaven), who still can’t remember anything, and gets Belle all agitated because Belle saw a man throwing a fire ball in the accident that put her over the city limits and caused her amnesia. The catch is, the stranger, Mr. Mendell (Ethan Embry) overhears everything. Well, we know he think something’s weird about the town.

Back in The Enchanted Forest, James and Jack find the way over-sized Anton trying to figure out how to get in the local tavern, when Jack gives him some shrinking mushroom from “another land.” Oh, gee. Wonder which land that is. Anyway, off they go to make friends, and Jack pretty much manipulates Anton into getting some of the giants’ treasure or their magic beans for James. Apparently, James and the kingdom are broke. Yeah, right. You know no good is coming out of this one.

And then we blip back to the modern world, where Emma and Henry are trying to get Mr. Gold through airport security. See, the TSA agents want Gold to take off his shawl and he doesn’t want to because he doesn’t want to forget who he is. Emma reassures him – not sure how or why she knows it isn’t going to be a problem, but she does. Gold gets through okay, but soon realizes, he no longer has any magic and we all know how well he does without magic.

Meanwhile, in Storybrooke, “Regina” finds Anton and gives him some magic mushroom to make him a giant again and off he goes on a major ruckus, presumably still hurt about what happened in the past. Again, I’m guessing that Regina isn’t Regina, but Cora, however we are given a clue as to what’s what on that front. Charming and Snow decide to confront Anton and in the process, Leroy asks Charming which is his real name, James, David or Charming, all while they’re running away, so at that point it becomes kind of moot. Anton, in a rage, tries to jump on Charming and creates this massive hole and then shrinks, landing on a rusty pipe over a bottomless pit.

Ah, but because this is Storybrooke and that’s just how the humans there roll, everyone pulls together to rescue Anton, thus restoring his faith in them – and Charming explains about his dead twin, separated at birth, and all that fun stuff, and we see just how big a jerk the original James really was, when the humans kill off the giants with poisoned swords, then when Arlo gets one good stab in on Jack, James just leaves her behind. Arlo also gives Anton the last bit of beanstalk and tells him to find a new land. Well, gee, he’s in one now, and while everyone does worry that Cora might find some way to use the new beanstalk, they’ll risk it because they want to go home to The Enchanted Forest. Well, except Snow, who points out that Emma and Henry belong to this world and “Home is where your family is and I’m not leaving them.”

Ah, but in the hospital, Mendell approaches Belle and says he saw the magic, too. And Henry, Emma and Gold take off for New York, but Gold is freaking and Emma’s beginning to wonder. And that’s where the episode ends. Just based on how next week’s episode was teased, methinks I know who Baelfire is going to turn out to be – namely Henry’s father. Hey, we still don’t know how Gold got Henry for Regina when she adopted him.