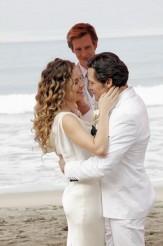 So Jack and Amanda get married and go out on the boat, but not 'til a bunch of other stuff goes down 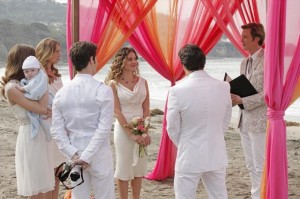 So “Union” is supposedly about all the forces, good and evil, getting together on REVENGE. But do we really care about that? It’s all about that sunken boat from this season’s premiere and whose body was in it. The way this episode was teased, I really thought this one was going to be the one where we find out. However, knowing this show, it’s entirely possibly they’ll find a way to drag that storyline out over several episodes. Feh.

So we start with Emily’s (Emily VanCamp) flashback to when she was the happy little girl Amanda Clarke, playing wedding with young Jack. Awwwww. Which, of course, makes her having to watch the fake Amanda (Margarita Levieva) marry Jack (Nick Wechsler)… How did Nolan (Gabriel Mann) put it? Complicated? Uh, Nolan, way more than complicated. But there’s not much Emily can do about it, because one of the few things out of that girl’s mouth that I actually believe is that she does want Jack’s happiness and Amanda is really in love with him.

As if Emily isn’t freaking enough, Nolan also drops the bomb that Conrad (Henry Czerny) is taking over half of Jack’s bar, The Stowaway. As we know from last week, mean Ryan brother Nate (Michael Trucco) is helping Conrad redevelop the pier area with high end condos. Ah, but Emily is more worried about Jack being in bed with anyone named Grayson, so she writes a check and insists that Amanda use it to buy Conrad out.

Daniel (Josh Bowman) is still torqued at Victoria (Madeleine Stowe) for trying to mess up his big deal, never mind that Victoria was, in fact, trying to save his backside from the evil Initiatives. His pique, however, is nothing compared to Aidan’s (Barry Sloane) rage about the Initiatives’ video showing his sister’s death. So now he finally figures it out that the video may not have been all that recent – sure enough, it’s six years old, but they still use an electrical meter in the background to figure out where it was shot. We’ll let that little hole go.

Initiatives’ front person Helen (Wendy Crewson) tells Daniel to invest in some Arab countries, and he’s reluctant. Victoria, on the other hand, overhears and knows exactly what she’s going to do and gets Conrad to give her the documents that set up David Clarke’s conviction, hopefully stripping their complicity in the whole sordid affair, for which Emily is driven to her REVENGE.

So, Jack gives Amanda her wedding present – a two-day trip out on the boat and then to a hotel, just the two of them and Amanda convinces Jack to use Emily’s money to get out from under the Graysons. The trouble is, with Conrad smelling a sure thing with the governorship, let alone the nifty profits from his deal with the Ryans, isn’t going to budge. Too bad, Amanda overheard Jack telling Declan (Connor Paolo) all about Conrad’s great plan.

Emily and Aidan find the warehouse, but no other evidence. Nolan, however, has run a search on Jane Does from six years before and sure enough, Aidan’s sister was dead a long time ago. Nolan, convinced that Padma (Dilshad Vadsaria) wasn’t playing him just for the fun of it, checks into it and finds out that the Initiatives have her father and are pulling her strings that way. Too bad Nolan gave her an incomplete version of the software she was supposed to score.

Amanda sneaks into Emily’s place and gets into her secret stash place under the stairs and even figures out Emily’s password. Yeah, you’d think Emily would have put together something stronger than the simple dictionary word “infinity,” but we’ll let that little hole go. Especially since Amanda uses Emily’s laptop (perhaps foolishly) to convince Conrad to give Jack the bar back, which Conrad does. But Nate’s pretty upset and threatens to take out the folks that Conrad has decided are standing in the way.

Emily and Aidan have it out, because Aidan is freaking that he’s completely failed in his mission to save his sister. Victoria gives Daniel the paperwork on the Initiatives, too bad Helen is watching from her spy cam. Then we have Jack and Amanda’s wedding on the beach with Nolan officiating – and I’m not sure which is weirder, that he’s doing it or that bizarre jacket he’s wearing. Awwww, Emily makes sure Jack gets the pipe cleaner ring she made for him way back when along with the official wedding band (of which we get a nice big close up of it going on Jack’s finger – remember the hand in the boat is wearing a wedding band). They can’t kill Jack off. They just can’t.

Daniel, all stressed about the paperwork, calls up Emily and breaks it off with her. That’s okay. Aidan’s around to help her feel better, and Emily’s being really kind and supportive of him.

Helen drops by the Grayson place to confront Victoria, and Victoria pulls a gun on her. How dumb can Helen get? Taunting Victoria that she’s not the type to kill? Come on, already! Has Helen never heard the one about mama bears and their cubs? That’s just too stupid to live, and sure enough, Victoria puts one right in her chest.

Jack and Amanda are out on the boat getting comfy, but oops, there’s Kenny clipping an important wire. But is it on the boat? Next week’s tease promises something going boom – I don’t trust these folks enough to be sure it’s the boat.