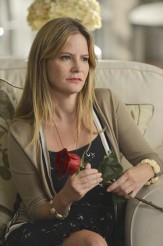 And we're back to stories spiraling out of control in 30 different directions. 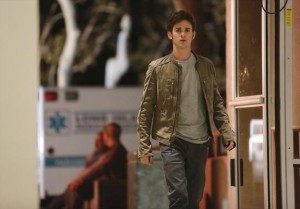 If there is a scene in “Forgiveness” that lasts longer than two minutes, I would be surprised. REVENGE has always had a problem with too much going on at a time, but it’s going more than a little bit nuts here. Add that to a sound problem that made the dialogue hard to hear in a few crucial instances, and it was rough going.

Because the real Emily Thorne is actually pretending to be Amanda Clarke (Margarita Levieva) because she traded places with the real Amanda Clarke, who as Emily Thorne (Emily VanCamp), the script is rife, rife I tell you, with ironic asides, which do little for the storytelling, but what the heck.

We start with Emily’s recovered memory of her mother Kara (Jennifer Jason Leigh) trying to drown her when she was five. Her father David Clarke (James Tupper) revives her, and it’s a dream sequence with Emily waking up with Aidan (Barry Sloane) in her bed. Emily is willing to forgive her dad for lying to her about her mother really being dead – he was trying to protect her.

The only problem is Kara has gone to Victoria (Madeleine Stowe) trying to find the now deceased Gordon Murphy (aka White Haired Man), to whom Kara is actually married. She’s also interested in finding Amanda, who is still in the hospital, with Carl, her baby, but will soon be brought around.

Daniel, for his part, is meeting with Aidan (Barry Sloane), who is there representing Mr. Takeda, who has a substantial amount of cash in Grayson Global. In the meantime, Victoria is stressing out that Kara is still alive and calls Conrad, demanding that he show up to meet her.

Declan (Paolo Connor) and Jack (Nick Wechsler) are trying to get the bar back up and running, so Kenny (JR Bourne), whose house Declan burglarized, offers some help so Declan can pay him back faster. Ah, but we know he’s after the bar for some unknown reason.

Thanks to Emily’s spying, she knows that Kara is hanging with the Graysons, who have promised her safety, apparently not knowing that Victoria’s kidnapper Gordon is Kara’s husband.

Amanda comes around and is in remarkably good shape for someone just out of a coma after falling off a balcony (what, no broken bones?) and Jack introduces her to baby Carl for the first time, with Emily looking on. This brings on a flashback for Emily, while she remembers David telling her about her mother dying. Emily also insists that Amanda and the baby stay with her.

Kara wants to know from Victoria why Victoria saved her instead of having Gordon kill her. Nolan’s (Gabriel Mann) new CFO Padma (Vilshad Vadsaria), with whom he is getting rather cozy, shows up in Daniel Grayson’s office, requesting information on David Clarke, the presumed terrorist, whom we know is innocent. She’s supposedly worried about the NolCorp assets currently invested in Grayson Global having been handled by a terrorist. Yeah, we believe that and Daniel doesn’t, either.

Back at the hospital, Amanda is off for tests and while she’s gone, Kara shows up and meets Emily, and tells her what a wonderful, innately good kid her daughter Amanda was. Did I not mention ironic asides. Oh, but evil journalist Mason Treadwell (Roger Bart) is back, drawn by Amanda’s acceptance into the Grayson family. Oh, but he’s so excited to see Kara, who isn’t excited to see him, and Emily boots him from the room, but not before Mason gives her one of those meaningful, knowing looks. Oh, yes, he knows something.

Amanda comes back to the room and Kara asks if Amanda remembers her. As Emily drives Kara back home, Kara is upset that Amanda doesn’t recognize her and they talk about Mason, with Kara confessing (among ironic asides) that she doesn’t believe that David was guilty.

Nolan and Padma are getting even cozier, and Daniel, Aidan and Ashley (Ashley Madekwe) are having drinks and Daniel lets it slip that all is not well at Grayson Global.

The next morning, Aidan shows up and Emily is fried because of Kara staying at the Grayson’s. If Kara sees Aidan and Emily together, their cover is blown. Problem is, while spying on Kara, they see her dial a phone, and sure enough it rings in Emily’s desk, which torques Aidan off, but while threatening Emily, he does spill that it was Padma who wanted the info on David Clarke from the Graysons. Hmmm.

Amanda is a little confused about Emily’s change of heart re her mother. First she wanted to find her, then she wants her mother to go. So Emily, who seems to be getting a little nicer, tells Amanda about her recovered memory of her mother trying to drown her.

Daniel tells Aidan to take Mr. Takeda’s money out of Grayson Global and run, but Aidan counters by pointing out that Grayson Global actually has a controlling interest in NolCorp – Nolan’s company – and that they should try to take over, which would also force Conrad out and give Daniel and Aidan control of the company.

Martin shows up at the Grayson house, trying to get to Kara, but Victoria won’t have any of it and threatens him. Kara visits Amanda at Emily’s house and explains that the reason everyone thought she was dead was that she made the choice, in a lucid moment in her psychosis (which seems to be cured somehow – or she’s staying on her meds), to tell everyone that. With Emily listening in, Kara asks Amanda to forgive her and Amanda does.

Back at the bar, Kenny makes his offer to Jack and he’s open to it.

Victoria finds Kara’s phone and points out to Conrad that Kara has been calling Gordon repeatedly to let him know what’s going on – that’s right, the Graysons don’t know he’s dead, either. So Conrad proposes to Victoria – huh? – so they can’t be forced to testify against each other.

Emily tells Amanda that she lied, Carl really is Jack’s baby and (okay, this is weird) apologizes for it. Ah, but while Kara is offering more ironic asides to Emily on the shoreline, Mason approaches Amanda on the porch, accusing her of not really being Amanda Clarke. Which means the only question now is how many episodes before they off Mason? Probably more than a few because it takes so long for each storyline to play out because of all the crazy different directions this show is going and another storyline is not what this show needs.