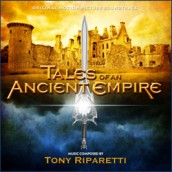 Albert Pyun arguably never had it better than when he made his visually splashy directorial debut thirty years ago with THE SWORD AND THE SORCERER, a film that energetically personified the wackier excesses of that titular 80′s genre. One element that made SWORD‘s” low budget a virtue was a powerful score by David Whitaker (available on Buysoundtrax), whose rousing music impressed, even when the playing of it didn’t. Flash-forward now to the SORCERER‘s sorta follow-up TALES OF AN ANCIENT EMPIRE, which takes on said kingdom with even far fewer shekels.

But at the least, let it not be said that longtime Pyun composing collaborator Tony Riparetti (MEAN GUNS) hasn’t successfully given his all towards putting musical production value into this intended epic. Howlin’ Wolf continues its love for the Pyun efforts of this underrated composer with one of his best works, perhaps made all the more powerful by the fact that Riparetti didn’t have the London Philharmonic at this disposal. The sound of ancient instruments jams with voices, powerful action and evocative atmosphere that certainly conjure a mythical kingdom in the listener’s imagination. Even with the cues taking on surprisingly long quests of running time, Riparetti always keeps the music interesting by combining a modern ethnic action sound with the feeling of an older, adventurous sound. But what really puts metal into this KINGDOM are Riparetti’s rocking guitar passages. It’s certainly fitting that Kevin Sorbo is the lead actor here, as EMPIRE succeeds best as a fun flashback to the late Joel Goldsmith’s underrated heavy metal n’ orchestra score to KULL THE CONQUERER, a combination of thrash and fantasy stylings that one again proves here that musical resourcefulness, talent and a rock background are the three best blades of all.

Click on Link: To Purchase The TALES OF AN ANCIENT EMPIRE soundtrack