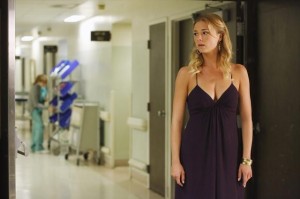 It’s a little annoying that even though this is a relatively focused episode of REVENGE, I have to dock “Intuition” a grade because of a personal pet peeve – it’s told in flashback. We start with a maid cleaning up a pool of blood from the Grayson entry way, with Victoria (Madeleine Stowe) watching, then crumpling up a piece of paper and tossing it into the fire. Then “24 hours earlier….”

Oh, puhleeze! This is just lazy scriptwriting trying to cover up that there might not be enough suspense in the story’s natural starting point, which is Emily (Emily VanCamp) confronting Aidan (Barry Sloane) about finding her mother Kara (Jennifer Jason Leigh) at the motel. The problem is, there’s the evil cabal that apparently has been pulling the Graysons’ strings for a long time, only now we have a name for it: The Initiatives. Apparently, they were behind the false accusation and imprisonment of David Clarke (Emily’s father), which lead to his death and Emily’s revenge on the Graysons.

We also have bits and pieces of several sub-plots going. Conrad Grayson (Henry Czerny) has been getting Ashley (Ashley Madekwe) to spy on his son Daniel (Josh Bowman), who in turn is pulling together the evidence that his father has been less than honest about the family company, which is about to go broke. Daniel finally tells Ashely what his dad has been up to and Ashley tells Conrad that Daniel only his best interests at heart and that she’s done spying on him. We’ll see how long she stays uninjured.

Jack (Nick Wechsler) is pushing Declan (Connor Paolo) to come clean about the break in at Ryan’s (JR Bourne) house. Declan is still trying to cover for Trey (Michael Nardelli), but this is plainly a bad move, since Trey and Ryan are working together to get the bar from Jack.

Nolan (Gabriel Mann) is working out the audit with Padma (Dilshad Vadsaria), who talks him into opening his father’s storage unit. They find all sorts of interesting stuff, including papers from when Nolan set up his company. Nolan also tries to kiss Padma, which is weird because based on last season, Nolan is gay. Okay, maybe he’s bi or the writers forgot what he is. No idea where that one is going.

Aidan tries to confront Kara one more time, telling her that Gordon (her lover and the deadly White Haired Man who actually killed David Clarke) is dead. Kara thinks he’s either from the Graysons or The Initiatives, so she’s not trusting him. She starts to hand over an important hard drive, then tazes Aidan, ties him up and leaves. Aidan escapes by breaking some glass and cutting his bonds.

Ah, but the main plot involves Amanda (Margarita Levieva), now pregnant, presumably with Jack’s child (but possibly it’s not). Keep in mind, Amanda Clarke is the real Emily Thorne. Amanda and Emily switched identities so Emily could do her dirty work. So everyone thinks Amanda is really David Clarke’s daughter.

Emily gets Amanda to try and find out more about Kara from Victoria, who knew darned well what was going on with Kara, and probably knows where she is now. Victoria tries to buy David Clarke’s journals from Amanda, but Amanda (under direction from Emily via phone) plays coy. So Victoria offers to throw Amanda a baby shower.

Emily crashes the party as the baby’s godmother, and Amanda brings a few of her stripper friends, too, to serve as a distraction. Victoria offers Amanda a baby journal with a very generous check. Ah, but Amanda has the visitor’s journal from the hospital where Kara was (which we’ve already seen). The handwriting on the check matches the suspicious sign-in of Charlotte Clarke, Amanda’s crippled aunt. So again under direction from Emily, Amanda confronts Victoria, first in the bedroom. Victoria is not going down easily and Amanda stalks out onto the balcony over the entry way. At the same time, the signal between her and Emily cuts out, so Emily doesn’t hear Victoria telling Amanda that David had told Amanda her mother was dead because her mother tried to kill her.

Victoria grabs the sheet of paper with her false signature on it, and in doing so, Amanda goes over the balcony. She’s alive and gasps to Emily to save the baby as she’s carted out in the ambulance.

Emily brings Jack to the hospital, and Jack is a mess, feeling guilty about his issues with Amanda – the two sort of broke up last week. Now, here’s where it gets really soapy. Obviously, they do the c-section to save the baby, but Amanda is in a coma. How classic is that?

Better yet, Kara makes her way to the hospital, and Emily sees her mother petting and caring for the fake Amanda. Then Emily goes home and has a truly nasty dream in which she, as a little girl, and Kara are swimming together, and Kara tries to drown her. Emily freaks, but fortunately Aidan is there and comforts her.

So apart from the completely unnecessary opening sequence, this turned out to be a pretty good episode. Now, if they can just stay this focused, while offering what bits are needed to bring the other storylines together, this could be an awesome season.