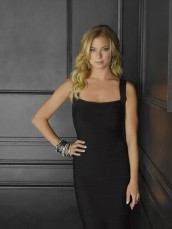 It's all about mourning Victoria and moving on. Or is it?

Do I spoil it? Do I? Do I? Last season’s cliffhanger ends with Victoria Grayson (Madeleine Stowe) getting on a plane and then news reports that the plane, supposedly containing all the evidence needed to put the evil Conrad Grayson (Henry Czerny) to jail for a very long time, exploded shortly after take-off with no survivors. Now, we have “Destiny,” where it comes out that…

Oh, let’s be real. Nobody on REVENGE stays dead for very long, except the rat fink Tyler and David Clarke – revenge for whose false imprisonment and murder is spurring his daughter, the former Amanda Clarke, now Emily Thorne (Emily VanCamp) to seek revenge on the Graysons and everyone else. The show started with Daniel’s (Josh Bowman) supposed death. Nolan (Gabriel Mann), Emily’s best bud and tech wiz co-conspirator, took a turn on the is he/isn’t he ride at the end of last season. Even Emily’s long dead mother apparently isn’t so dead after all.

We get to start, however, with another tease, this time with divers investigating the sinking of a boat on Labor Day – which means we’ve actually skipped three months ahead of where the story really begins, just like we did at the beginning of Season One. And the divers find a body and, yes, the boat is Jack’s (Nick Wechsler) boat, the Amanda. No, we don’t know whose body, but the hand was clearly a male’s. So now we skip back three months to just before the Memorial Day weekend, a year after where our story began in Season One.

Emily is back in training with Mr. Takeda (Cary-Hiroyuki Tagawa, taking the place of Hiroyuki Sanada, who was credited as Mr. Takeda last season), this time durned near drowning herself to revive memories of her mother. However, there’s this new guy Aiden (Barry Sloane), who’s hanging around, as well, and seems pretty worried about Emily. Emily is flashing back, however to memories of her mother Kara Wallace Clarke (Jennifer Jason Leigh), in a hospital, and now she’s determined to find out what happened to her mother.

Back in the States, however, it appears that Victoria’s daughter Charlotte (Christa B. Allen) is doing rather well in rehab. Her older brother Daniel is still drinking heavily and sort of having a relationship with his mother’s former assistant Ashley (Ashley Madekwe). Charlotte convinces her father to let her host Victoria’s opening season art auction as a memorial to her mother.

Emily, for her part, looks up Nolan (and, hooray, the Bieber cut is gone, gone, gone – he’s so much cuter without it). Nolan immediately volunteers for wing man duty and since he’s selling his other house in the Hamptons, tries to convince Emily to let him stay with her. For now, however, he and Emily head out to the hospital where she thinks her mother must have been, which mysteriously closed the week her father was arrested.

Jack is staying on his boat (it’s not been blown up yet, remember?) even though he’s trying to make a life with Amanda (Margarita Levieva). Amanda being the real Emily Thorne, but having traded places with Emily, the real Amanda Clarke. Amanda is heavily pregnant, supposedly with Jack’s child. The problem is that Jack is a really decent guy who turned to Amanda because he thought she was his childhood friend. Only she went away after Tyler got killed (mid-season last year) and at the end of last season, sparks flew between him and Emily (his real childhood friend), so now that Amanda is back, things are, like, insanely awkward and Declan is not happy about it all, especially since things at the bar are going to heck with Jack being so wigged out.

Daniel’s issues seem to be centered around grief for his mother, but there’s also Conrad pushing him to take his trust money and invest it all in the family company. Oh, and Emily seems to be triggering a few issues, as well, because she’s moved back into the house next door.

Charlotte arrives at the art show, put on by Ashley (who now has her own assistant, what fun), and speaks her piece. The only problem is that her recovery doesn’t seem to be going so well – her last blood test came back positive – which shocks Charlotte since she knows she’s not using. As Conrad sends her back with the drug counselor, Charlotte realizes it’s not about her health and reaches out to Emily for help, whispering something in her ear.

Can you guess? Can you guess? Yes! Charlotte has told Emily where Victoria is hiding in the biggest so-not-a-surprise moment of the day. Victoria tells Emily that the feds are hiding her until they can build an air-tight case against Conrad. Does Emily believe her? Of course not. She grabs a shell from the mantle, then returns it with another of Nolan’s mini-cans – this year’s version of the whale cam.

Emily also checks in with Jack, who clearly is still in love with her, and asks Jack if he’s sure Amanda’s baby is his. Amanda seems pretty sure – she’ll get the appointment – but it’s not helping the relationship.

Nor is Victoria to be trusted as we see from the shell cam. The White-Haired Man (James Morrison) is back, helping Victoria stay dead, as it were, and Victoria sends him to take care of Emily. When Nolan points this out, Emily is fine. “Let them,” she says.