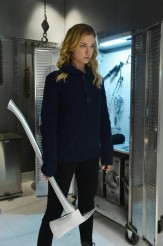 Cliffhanger fun as we find out, it's more than the Graysons 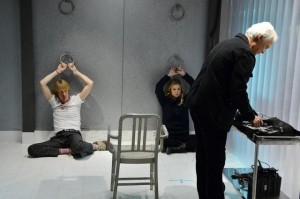 Like you couldn’t have figured “Reckoning,” the season finale of REVENGE was going to end in a cliffhanger. Cliffhangers have been the Standard Operating Procedure for this show from scene one. Even last week’s episode, “Grief,” ended with us wondering if the producers had really killed off Nolan (Gabriel Mann – and one of our totally fave characters).

Whew! They hadn’t – and we find that out in relatively quick order, for which we are grateful. We also find out that Daniel (Josh Bowman) and Conrad (Henry Czerny) are basically panicking because the Evidence (with a capital E because it’s so important) they need to save themselves from the nameless bad guys represented by the White Haired Man (James Morrison), which Victoria (Madeleine Stowe) stole last week, has disappeared. Emily’s house was broken into and the briefcase that had the Evidence has been emptied.

Emily (Emily VanCamp) is getting pretty worried about Nolan, but when she goes to Nolan’s place to find him, there’s a laptop with the instructions to meet the nasty White Haired Man (WHM). So Emily goes, chloroforms herself and wakes up chained onto the wall next to Nolan. Doesn’t this seem a bit overdone? Yeah, but we’ll go with it, and the way Emily has a lock pick in her sleeve and is able to free herself and Nolan, who, it turns out has the Evidence. Emily, has, of course, sent WHM off on a wild-goose chase. So Nolan takes off and Emily stays behind to get WHM for killing her father.

In the meantime, Charlotte (Christa B. Allen) gets her revenge on Declan (Conno Paolo) by posting some not so nice stuff about his new female buddy Jaime (Rachel DiPillo), which gets Declan unhinged and telling Charlotte not to ever call or contact him again.

Jack (Nick Wechsler) returns Daniel’s check to him – he doesn’t want to be in Daniel’s debt. Daniel, shocked that anyone could turn down a million bucks, turns to Ashley (Ashley Madekwe), who tells him about Jack and Emily’s kiss over the dead dog last week.

McGowan (Michael Reilly Burke) gets the anonymous text that the Evidence is in his trunk, while Conrad gives Lydia (Amber Valletta) an engagement ring to prevent her from testifying. Then Emily fights WHM, just barely comes out on top, but chooses not to kill him.

Daniel confronts Emily about Jack and Emily breaks up with him because he’s become like the rest of his family. Then Daniel confronts Victoria, angry that she’s going to sell out his father and the rest of the family, but Victoria tells him that Conrad contracted out the murder of David Clarke – Emily’s father (Emily is not her real name, her real name is Amanda Clarke) and Victoria has decided it’s time to right a terrible wrong.

And since Lydia and Conrad got engaged, Lydia’s changed her mind about testifying against Conrad, but, gee, Victoria seems to have the trump card in that respect since she knows how Conrad works. And all of a sudden Lydia tells Conrad that she’s going to visit Philly for a while. You think Conrad hasn’t figured that one out?

Emily, for her part, free of Daniel, the Evidence safely on its way to Washington, seems to have her revenge all played out. So naturally, she goes out to see Jack. Uh, that doesn’t work out so well because the real Emily Thorne (Margarita Levieva), who has been masquerading as Amanda Clarke, lo, these many months, has come back to Jack and is preggers, presumably with his child – let’s face it, nothing is ever a gimme on this show.

And it turns out, when Emily (the real Amanda) looks at the evidence, it’s pretty clear that it wasn’t Conrad who set her father up to take the fall for the terrorist attack that downed a whole plane-load of people. There’s another mysterious group that has Conrad by the… ahem, nose.

Charlotte is miserable because her revenge on Declan has gone horribly awry, and she starts to talk to her mother about it, when Conrad comes storming in, demanding that Victoria not testify, with the magic line, “If you board that plane [to Washington] it will be the last thing you will do.” Can you see what’s coming? How can you not?

Gee, there’s Lydia getting on the plane. The lo-o-o-o-ong shot of Victoria getting on the plane. There’s the WHM pulling the blocks from the wheels. There’s the news that the jet has exploded with apparently no survivors on the TV set in Charlotte’s room (works for the plot except for what teen watches TV news?). Charlotte calls Declan, who doesn’t listen and tells her in no uncertain terms to contact him again. Charlotte falls unconscious, scattering pills to be found by Conrad.

Emily, who isn’t a particularly happy camper at the moment, is watching the crash report on her computer when Nolan comes in. All the Evidence that would exonerate her father was on that plane. Ah, but if ever you needed a reminder of the importance of backing up your data and keeping multiple copies, here it is – Nolan backed up the hard drive with the evidence and kept an extra copy. But, wait, there’s more. Not only was there this big cabal pulling Conrad’s strings so that they could perform acts of terrorism on the American people, they have something on David Clarke – Emily’s long-dead mother. Long-dead? Are you kidding? Emily’s mother is still alive.

Well, the producers had to figure out some way to keep Emily seeking revenge and it looks like they’ve found it. And next season should be fun, now that Emily and Nolan are up against some nebulous secret group of baddies. A worthy finale, especially with Victoria’s fate hanging in the balance. Oh, come on, you know she survived the crash somehow. If Lydia could survive falling five floors onto a taxi cab, you know she could help Victoria survive an exploding plane.

It’s soapy as all get out, but that’ what makes this show everyone’s fave guilty pleasure.