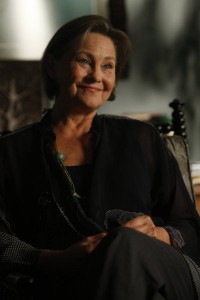 AWAKE has its series finale tonight on NBC. The thoughtful, offbeat show is part psychological mystery and part procedural. Created by Kyle Killen, who executive-produces with Howard Gordon (24, HOMELAND) stars Jason Isaacs as LAPD detective Mike Britten, who wakes to one reality where his wife is alive but their son has died, then goes to sleep and wakes in a different universe where his teenaged son is still with him but his wife has passed away.

Not surprisingly, Mike is in therapy. His doctor in the universe where his wife still lives is Dr. John Lee, played by BD Wong, while the therapist in the world with Mike’s son is Dr. Judith Evans, played by Cherry Jones. In a twist that is ironically humorous, the two doctors passionately disagree with each other, even though neither believes the other one exists.

Jones is best known to TV audiences for playing the President of the United Stateson the final two seasons of 24, while Wong (the BD is short for Bradley Darryl) has spent eleven seasons on fellow NBC series LAW & ORDER: SVU as police psychiatrist Dr. George Huang. Both are Tony Award winners – Jones for THE HEIRESS and DOUBT, Wong for the role he originated in M. BUTTERFLY – and, even though they have no scenes together in AWAKE, they take great delight in affectionately teasing each other during this interview.

ASSIGNMENT X:  I’m guessing you came to AWAKE through having worked with Howard Gordon on 24 …

AX: How did you come to AWAKE?

BD WONG: I came to the show in the normal fashion. I had been on LAW & ORDER: SVU for eleven seasons and just decided to try to see if there was anything else for me. I thought, “Well, if I snag something else, I’ll do another show.” And I threw my hat in the ring for pilot season last year, and this came along, and it couldn’t have been more perfect for me. I was really lucky. They actually didn’t even close the door for me at SVU

AX: AWAKE creator Kyle Killen has said that Dr. Evans was originally supposed to be twenty-eight years old and …

JONES: And a bombshell. And I think the other gentlemen in the room [during the development process] said, “We’ll give you one, we’ll give you two, but we ain’t gonna give you three bombshells.” [laughs]

WONG: In one show.

AX: Killen’s theory was that it just didn’t seem like somebody who was twenty-eight should be giving Jason Isaacs advice, whereas you seem like you should.

WONG: Possibly. I wouldn’t be a hundred percent sure, but I think that might have been possibly part of it, that she was inexperienced and not like this [indicates Jones] at all. She [Jones] is formidable. [The character originally] was written super-nice … 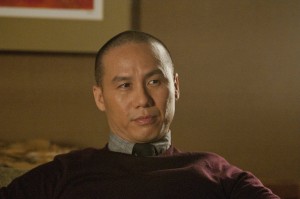 WONG: Yeah, like it was her first job. It wasn’t like she wasn’t smart or anything, but it was written intentionally like that, by the way. But then they had an opportunity [to cast Jones] that they grabbed.

AX: Was Dr. Lee very different in the original script?

WONG: I think he maintained some consistency.

AX: Do the two of you watch what the other is doing to play into or against that?

JONES: [laughs] I try to avoid watching him, but I do like to read what he’s going to say.

WONG: We get to see each other whenever we shoot, which is really nice, because if I’m going to have this job and she’s going to be on it, I want to have that experience with her, but we don’t really work together that much.

[At this point, Jones is called away.]

AX: When you first read the script, did you get it right off the bat, or did you read it a couple of times thinking, “What on Earth is going on?”

WONG: It wasn’t at all hard to get. It was all there. And it didn’t need to be explained or anything; it was very elegant, it was very interesting, it was super-compelling and it was super-moving. And it was of a quality that I was very attracted to. I read a bunch of scripts that year, and there wasn’t anything as good.

WONG: Not really. To be honest, I’m in control of that. I can choose to do what I do or not do, and I chose to do this. When someone came to me and said, “Oh, here’s a script and the role is a therapist,” I said, “Come on.” But they said, “You have to just read it and make a judgment after you read it,” and that’s exactly what happened. They knew I would like it – they wouldn’t have given it to me if they didn’t think it was worth looking into and worth considering. I’m in control the next time around what I’m going to do, and it will be something different. But this was an opportunity that was very different from the show that I was on before, so I didn’t really hesitate.

AX: What would you say the differences are in the therapeutic styles of your two psychiatrist characters?

WONG: My main difference is that the character that I play on this show has a working relationship with the main character on the show, who he’s invested in, who he has feelings about. His success is related to a very specific path of work and he plays a very large role in that path. The dispensing of information is not really the main feature of the role that I play on [AWAKE] and arguably the dispensing of information was a large part of my last iteration of this particular vocation. So as an actor and as a human being, it is much more interesting to me to be involved in Britten’s life as a kind of caregiver. The most interesting parts of my job at SVU were the times that I was invested in the characters and what they were going through, or when they came to me for advice, where it was not forensic but personal. And that opportunity arose over the eleven years, but it was not part and parcel of the main thrust of what I was there for.

AX: Did you have any talks with NBC, which airs both shows, about, “I’d like to move from here to here”?

WONG: No. I was perfectly happy there [at SVU]. It changed my life in a tremendously positive way. But I have done it for eleven years and I was just looking for something tasty that was different. And ironically enough, this was tasty and different, but I was playing a person in the same job.

AB: It seems like your character and Cherry Jones’ character have slightly different takes on the Jason Isaacs character, where Dr. Lee is getting very frustrated that Mike won’t say that Dr. Lee is real and  Dr. Evans isn’t real.

WONG: Well, it’s not necessarily the admission of what is real. It’s his inability to acknowledge that he needs to take a serious look at himself, or that this thing that’s happening to him is potentially dangerous.. I’ve kind of called him to the carpet. But I am very strong with him about, “If you don’t look it this, something bad’s going to happen.” And her take is very touchy-feely, and she’s very kind of intuitive and very sensitive to his feelings and needs – and is also urging him to do that. But I just have a stronger kind of method of discussing it with him. She’s active in her wish that he needs to do something, but she has a different way, because she’s a different person. When push comes to shove, I think we agree as medical professionals that he needs to look at this and do something about it. The way that we are getting him to do that is different, because of our personalities being different.

AX: M. BUTTERFLY was your first Broadway play back in 1988, and you won the Tony for Featured Actor in a Play. Was that a big, life-changing event for you?

WONG: It was, because I was up until that point, a person who had my own idea of my own work as an actor or talent. And I never had been tested – I was a person who had dreams. And so this was a validating experience, in that I was given a huge task and I think a big responsibility. I felt that the play quite possibly wouldn’t work if I wasn’t good in it. Sometimes you can be in a play and you’re not good, but the play can still work. But I felt if I was not good, the play would not work. And so I did the best that I could to rise to the occasion, and it didn’t suck. And so it changed my life and my view of myself. A lot of different parts of me got changed throughout that process.

AX: Have you had any other life-changing roles?

WONG: Well, when I was very young, before M. BUTTERFLY, when I was nineteen to twenty years old, I first came to New York and I worked as a volunteer usher at Playwrights Horizons, where I saw a life-changing performance of a musical that nobody really knows called HERRINGBONE with an actor named David Rounds, who passed away very soon after he did it. I became infatuated with this play, and then I began this process of wishing to do this play one day. So many, many, many years later in the game, at three different regional theatres in the country, I initiated and performed this play that I had dreamed about. And personally for me, that was extremely validating. It was great for me to be in control of it and to get the enthusiasm from others for this odd little musical and to try to recreate the theatrical experience that David had given to me. And so that was another thing that was a big deal. That was one big thing, and M. BUTTERFLY was the other big thing, and everything has its way of moving your life in one way or another.

WONG: I have been directing a solo show of a wonderful actor named Cindy Cheung in New York City. It’s a developmental process that has taken her from a solo playwriting workshop to a small Off-Broadway venue. And I’ve enjoyed that immensely. That show is called SPEAK UP CONNIE, about her life as a person who doesn’t speak up herself, among other things. And I [was in] this movie called WHITE FROG, which is by a young filmmaker, Quentin Lee. It’s his latest film with me and Joan Chen as the parents of a boy with Asperger’s. And the boy is played by this kid named Booboo Stewart, from TWILIGHT. Harry Shum, Jr. from GLEE plays our older son. This is a family drama and that was a great experience. I spent a few weeks making that movie, and I’m really into those kinds of independent [filmmaking] experiences. I really liked it.

AX: Is there anything else you’d like to say about AWAKE?

WONG: Yes. I would like to say that I refuse to apologize for something that is thoughtful and intelligent. In many ways, I was drawn to this project, I’m involved with this project, and so I can speak for the rest of the cast without even asking them – because of its thoughtfulness, humanity and intelligence. I will not apologize for it or hesitate in saying it is wonderfully smart, wonderfully different.