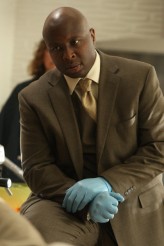 The actor talks about playing a cop on the existential procedural 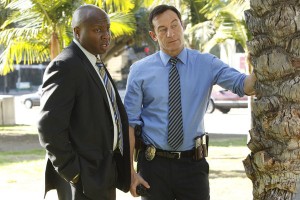 AWAKE, which has its series finale tonight on NBC, has been a fascinating mixture of procedural and what-if. Creator Kyle Killen’s story posits that, following a horrific car accident, LAPD homicide detective Mike Britten, played by Jason Isaacs, wakes up from one reality into another. In one, his wife (Laura Allen) has survived the crash with him, but they have lost their son, and on the job, Mike is putting up with a rookie detective (Wilmer Valderrama) who’s meant to keep an eye on him. In the other reality, Mike’s wife has perished but their teenaged son Rex (Dylan Minette) is still alive and Mike is still working with his longtime detective partner Isaiah “Bird” Freeman, played by Steve Harris.

Harris, a native of Chicago, spent eight years as attorney Eugene Young on David E. Kelley’s legal drama THE PRACTICE. In this interview, conducted before AWAKE’s cancellation was known, Harris talks about trading the law bar for the law badge.

ASSIGNMENT X: You spent a long time doing a legal procedural, and now you’re on a police procedural. Is that just because, if you’re on hour-long series television, odds are good you’ll be on some kind of a procedural, or …?

STEVE HARRIS: In all honesty, it has nothing really to do with it. The first [THE PRACTICE] was David Kelley, the second [AWAKE] was Kyle Killen. The writing was the foundation. Clearly, the project has proved itself. Initially, when I read the script, before I even got the job, I did the audition and met [the producers] and I said, “I don’t know if I’m going to get back here, but I just want to tell you that that was a good piece of writing.”

AX: When you first read the script, did you have any questions about, “What’s going on here?”

HARRIS: I had a thousand questions. I read it three times. There were so many layers to it, so many things that were available to you to be presented, that I had to roll with that. So yes, I did.

AX: How would you say your character Bird reacts to the post-accident changes in his partner Mike?

HARRIS: He does know something’s askew, only because now we play more hunches. As Jason pointed out, his character is very [level-headed]. This is how we’ve always worked together. I’ve been his partner for years. And now we’re playing hunches. The hunches most of the time pan out, so we can go with them, but I feel like it’s being a married couple. We’ve been married for awhile. Now all of a sudden, your wife wants to do something a little different in the bedroom, and you’re thinking, “Oh, no, wait a minute, where did that come from?” That’s what’s happening with our relationship.

AX: Were both Bird and Mike doing the same sort of detective work before the accident happened, or did you already have different views?

HARRIS: We had different views, but we worked well together. We were compatible with each other. He was more with his analytical thing; I am a person who sort of sees the big picture, and we could piece it back – “This makes sense, that makes sense, this doesn’t work out” – and then we were able to jibe together and come together as a unit. But right now, he’s coming up with a lot of hunches and really, that was kind of my job.

AX: When you were a kid, did you ever want to be a cop in real life?

HARRIS: I’m from the West Side of Chicago. I never wanted to be a cop. I didn’t have that fantasy [laughs] – truly, that was never my thing. What was really sort of interesting is the authority that is carried within it. You know, cops in everyday life, the kind of authority they carry with them. It’s that sort of thing that makes it interesting, but they’re flawed. And they’re just like everybody else – they just happen to wear blue or detective suits or whatever they want to do, but they’re flawed like everybody else. So I think if you’re able to tap into [that sense of authority and those flaws], then I think you’ll ride with it.

AX: So you think most people will be able to relate to AWAKE?

HARRIS: If you look at our cast, that’s the United Colors of Benetton cast right there [in terms of multi-ethnicity]. The cast represents everybody, as it should be. And so I think you can tell, as in THE PRACTICE, there was somebody [in the cast] that you see, “Oh, that looks like me. Now we can go on.”

AX: As you never aspired to be a cop at any point, did you have to do any research in order to play a police detective?

HARRIS: It’s the same way I deal with [playing] the lawyer. On set, we have police officers who are there for consulting purposes and the whole nine yards. I did take shooting lessons so that I would know what I was doing in case we had any episodes where I actually had to use a gun, know how to hold them, know how to present myself, so I did have all of that. So, yes [there was research] to some degree. But I didn’t actually go for the rides [with the police] that Jason did. I wanted my guy to be like the people that I grew up around. In certain neighborhoods, police officers aren’t welcome. We only call them when there are dire circumstances. So I understand that, so I wanted to play him as purely as I could, faced with that knowledge and what we’re here to accomplish.

AX: So your police detective is somebody who expects that people won’t necessarily be happy to see him.

AX: Your brother is the actor Wood Harris, from THE WIRE. Do you have any plans to work together?

AX: What have you enjoyed most about working on AWAKE?

HARRIS: Honestly, I get a chance to play. As this has developed, they actually let a little more of me come out into this character. So I get to play a little bit, We [the Bird and Mike characters] have banter, we have that sort of thing that police officers have. So it allows me to be more of a three-dimensional character and something that I want to create at the same time. You have to be willing to understand what you’re willing to represent, and that’s always part of my thing. You have to put in the work. They were able to see me in this role when I came in and did what I was supposed to do, and now we just have to fulfill it. That’s my job. That’s the way I’ve always looked at it. My job is to make it even better than he writes it. Because [in the performance], I have to live it.