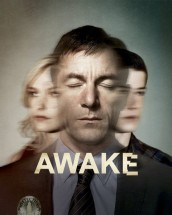 Another solid episode delivering on the show's complex premise

I have to admit, I was a bit skeptical when when I heard about the premise to AWAKE and how it was going to be able to sustain itself, in two different realities, week after week.

Yet, here we are in Week 3, and the show continues to stay on the right path. It’s complicated, complex, but thoroughly engaging with a plot device that brings its own suspense and danger to it.

Granted, “Guilty” is a little too early in the show’s run to put one of the main character’s family in danger because of a bad guy, but I’m willing to give the show a pass, if only that it was written and executed so well.

Using the two realities (the one Britten lives in with his wife, the one with his son), he grills the other reality Cooper, hoping he can get information that can find his son in the other reality. What he also discovers, is that one of his best friends, is also a dirty cop and was actually the one who committed the murder and framed Cooper.

“Guilty” is a twisty/turny adventure, that has the energy and excitement that executive producer and writer Howard Gordon (with Evan Katz) brought to their signature action series 24.  There’s an excellent balance of how Britten exists in the two worlds, and utilizes them for information – almost, to some extent, crossing a line in terms of how he operates as a cop. Imagine going to court explaining how he got the tip for one case in one reality and solved the crime in the other. Kinda cool if you think about it.

Again, the only big misstep is putting Rex in danger. It does amp up the ticking clock, but it just feels too early and convenient for this to happen.

Still AWAKE has my attention – and it hasn’t gotten too overly complicated that you can’t follow what’s going on. Let’s hope the audience sticks around, because if this is any indication of what the show is like on Episode 3, I can’t wait to see how it evolves by the season’s end.

In Memorium: THE TOWN and IN THE NAME OF THE FATHER actor passes away ...
TV Review: DEXTER - Season 6 - “Nebraska”
INTERVIEW: HANNIBAL gets twisted score by Brian Reitzell
Exclusive Photos: From 300: RISE OF AN EMPIRE Los Angeles Premiere