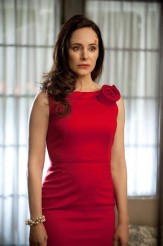 Aidan and Emily are having issues. So is Nolan, and Conrad and Victoria return threat for threat. 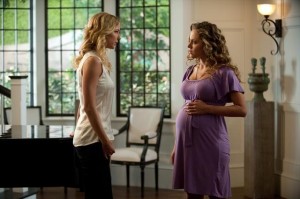 REVENGE has always had a problem with its story running in too many directions at once, and in “Confidence,” it’s not getting any better. We’ve got Declan (Connor Paolo) breaking into houses with Trey Chandler (Michael Nardelli), Daniel (Josh Bowman) trying to figure out which parent he wants to trust, Victoria (Madeleine Stowe) and Conrad (Henry Czerny) trying to up each other with threats, Amanda (Margarita Levieva) having a baby that’s supposedly Jack’s (Nicholas Wechsler), but Jack’s having issues with trusting her even though the paternity test came back positive, only Emily may have messed with the results and it’s not Jack’s, and Nolan (Gabriel Mann) is being audited by the Feds and there’s this new CFO at the company, Padma (Dilshad Valsaria), but one can’t help wondering if the audit is related to the cabal controlling the Graysons that resulted in the false imprisonment and death of David Clarke, oh, and Emily (Emily VanCamp) is trying to find her mother, whom she thought was dead, but turns out is alive, and Aidan has suddenly appeared to help her and not only do he and Emily have a history, they’re both trainees of Mr. Takeda (Cary-Hiroyuki Tagawa), who appears to be in the business of helping folks get revenge.

The idea of the series is that Emily (the former Amanda Clarke) is seeking revenge on the Graysons for the death of her father David Clarke. Emily has switched identities with the former Emily Thorne, now the pregnant Amanda, to do so. But she has also spent significant time with Mr. Takeda being trained to get said revenge, although there’s a hint near the end of this episode that Mr. Takeda has something else on his agenda that Emily isn’t necessarily buying into.

When we last left everyone in The Hamptons, Aidan had just shot the White Haired Man, now identified as Gordon Murphy (James Morrison). Emily’s less than thrilled that Aidan is back – she apparently had a relationship with him while the two were training with Mr. Takeda, plus Emily suspects that Mr. Takeda sent Aidan to get her back on Mr. Takeda’s agenda. Funny thing is, while Emily comes up with Murphy’s phone as a key clue, Aidan hits the jackpot – a room key to a Pine Crest Motel.

Charlotte (Christa B. Allen) believing that Amanda is, in fact, her long lost half sister, thanks to the affair that Victoria had with David Clarke that resulted in Charlotte, sends Amanda a very generous gift certificate to outfit the nursery with. Only Jack’s not so thrilled with any connection with the Graysons and tells her not to accept it. But Emily has other plans for Amanda and sends her to the Graysons to deliver their father’s journal to Charlotte, telling all about the affair.

This gets a little awkward because Victoria is trying to deal with all the press that’s hanging around trying to get more details on the kidnapping (which, of course, Victoria faked), especially when Charlotte gets angry and bursts into the exclusive interview with Vanity Fair and tells the reporter that David Clarke is her father, not Conrad.

Victoria, being the superb gameswoman that she is, decides to go with it and plays it all up during the press conference, collecting in even Amanda, which kind of messes things up with Jack who realizes Amanda lied to him about going shopping with Emily for the baby.

Aidan goes to the motel and searches the room, finding some weird canister with a bunch of recordings on it. He gets caught by the motel’s manager, and is that…? Yep, it’s Kara (Jennifer Jason Leigh), Emily’s mother, who calls Gordon and starts getting worried that he’s not picking up. Emily has also found some psychotropic drugs on Gordon and thinks they might belong to her mother and that Gordon was caring for her. Emily also dismisses Nolan, thanking him for his help, then hears her mom telling Gordon she loves him.

After Emily tells Daniel to that the only way to win with Victoria is to play the game better than she does, Daniel makes nice to her. So we’re left not sure if Daniel really is making nice or just trying to beat her at her own game. Either way, things are just plain muddled, confused and going off in so many directions that, really, it’s getting out of control. It will be interesting to see if any of the storylines get tied together. After all, Amanda is getting awfully close to her due date.