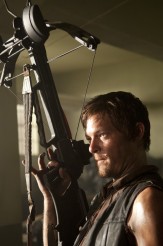 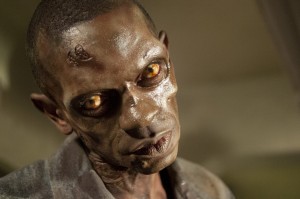 In the second episode of THE WALKING DEAD Season 3, “Sick,” Hershel’s (Scott Wilson) life hangs in the balance. Will the former farmer wake up alive, or will he turn, becoming a Walker determined to destroy his one-time friends and family? That’s the least of the group’s problems; the prison is not empty, and that includes living as well as dead tenants. A small group of surviving prisoners are as shocked to meet our heroes as Rick’s people are to meet the convicts that have been waiting for rescue for ten months. As everyone tries to make an uneasy peace, Rick considers all options, including just killing the strangers. Surely he couldn’t do that…but then again, this isn’t the old Rick.

The momentum doesn’t flag at all in this excellent episode that picks up the moment after the premiere ended. The prisoners offer viewers a way back into the true emotional enormity of the apocalypse by introducing these new characters to the status quo and giving us a chance to go over some basic aspects of the post-zombie reality that now imprisons everyone. The superb haunted house cinematography of last episode’s slow hunt through the prison continues this week as well, this time with the team having to train the clueless convicts in the finer art of dispatching the walking dead…and they don’t learn fast.

Besides the great pacing and action, the new Rick is a welcome improvement as he continues to embrace aspects of Shane’s (former co-star Jon Bernthal) personality – the friend/almost brother that taught him this world requires a more practical, less civilized approach. Doing whatever it takes to keep his people safe, Rick is a man dedicated to making a home for his extended family of survivors, and it’s great to see a decisive Rick instead of the shell-shocked one from most of last season. Up until now, if I had to pick one character I liked the most, it would be Daryl (Norman Reedus). He was already evolving in a great direction last season, but he’s been the one man I would most want at my side and watching my back in the zombie apocalypse. But I have to admit, Rick is moving up that list with a vengeance. And to that point, spoilers ahoy! 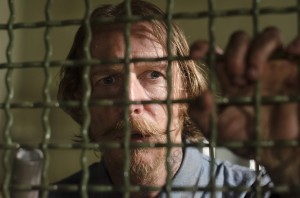 Rick taking out the most troublesome, dangerous prisoner among the newcomers – a man hell-bent on getting Rick killed during a chaotic battle with corpses – and with an up-close swing of a machete straight into his skull was not only a fantastic DAWN OF THE DEAD (1978) homage but a brilliant moment of cold, calculated, and justified savagery. Rick is at last letting go of rules that once mattered but no longer make any sense. You might say he’s re-earning his badge under a new kind of system, even more so when he throws another of the surviving prisoners to the horde. It’s time to make the hard choices, and Rick will have to live with them; here’s hoping he does so for years to come.

He isn’t the only one evolving; addressing her less-than-sterling performance as both wife and mother – and perhaps acknowledging the audience’s reaction to her character too – Lori (Sarah Wayne Callies) continues to show signs of personality rehabilitation. It’s quite impressive that when she tells Rick she knows he has to do what he must and should do so with a clear conscience, she really seems sincere. Finally Lori is facing reality, and if so, this is going to go a long way to healing the damage done to her character last year.

Sadly, while Lori is getting better, Carl (Chandler Riggs) is getting a bit worse. Surely he should know better by now, especially having felt guilt at helping to facilitate Dale’s (Jeffrey DeMunn) death last season, than to wander off and do things on his own. But no, he disappears to get medical supplies, takes out two Walkers alone, endangers himself and perhaps others, and then acts offended when his own mother calls him on it. Keep an eye on this kid; he’s trouble.

Lauren Cohan nails a highly charged scene where Maggie tells her comatose father that he can let go if he must, and there’s a great if predictable fake-out scare when Hershel reawakens explosively during Lori’s attempt to revive him – has he crossed over? Oh come on, look at the opening credits; he’s a regular. Hershel’s reawakening is also a beautiful moment as he reaches out to take Rick’s hand. It’s not that he’s ignoring his children, but rather that first he’s acknowledging the man that saved his life and the growing bond they share (one that I feel is partially serving as a totally acceptable replacement for any Dale-related storytelling lost in the wake of DeMunn’s departure). The episode ends with another touching scene in which Rick tries to literally and figuratively reach out to Lori but can’t quite go all the way. It’s going to take a long time – if ever – to heal that relationship…

For those sad that this was a week without Michonne (Danai Gurira) and Andrea (Laurie Holden), don’t worry – they’re back next week, and we’re also about to meet a man called the Governor (David Morrissey). Brace yourselves, folks…