Victoria and Conrad get re-married, Daniel is plotting with Aidan and Martin is causing trouble, but wait, there's even more! 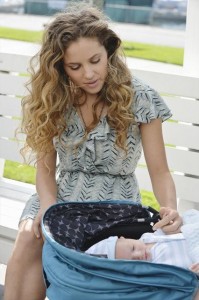 I must confess, there are parts of REVENGE that I am just not getting, probably because there’s just too much story to keep track of. I’m serious. It’s bad when scenes are moving so quickly that I can’t even get a note written (in short-hand) before the next scene starts going. And that’s pausing my DVR and going back a time or two. Seems like the only “Illusion” going on here is that there’s a coherent story line.

With Conrad (Henry Czerny) and Victoria (Madeleine Stowe) preparing for their second wedding (ostensibly to protect themselves against having to testify against each other), Emily (Emily VanCamp) is coaching Amanda (Margarita Levieva) on what to say to Martin Treadwell (Roger Bart) about how the scar that should identify her as Amanda Clarke is missing from her back – plastic surgery. Note – just to keep the confusion down, even though Emily is really Amanda Clarke and Amanda is really Emily Thorne, we refer to them in their assumed names because everyone else in the show does.

Kara (Jennifer Jason Leigh) is still  looking for her husband Gordon Murphy, the nefarious White Haired Man, with whom Victoria was in league. Now Victoria, of course, claims that he’s the bad guy who kidnapped her and is dissing him readily, probably unaware that Kara is married to Gordon. Or was when Gordon was alive. Kara doesn’t know he’s dead yet.

Now, here’s where things are getting wonky. Daniel (Josh Bowman) and Aidan (Barry Sloane) are conspiring together to take over Grayson Global by trashing Nolan’s (Gabriel Mann) company NolCorp, that apparently had ties to Grayson Global through David Clarke, who alas, has yet to be exonerated after having been set up to take to fall in a terrorist plot, apparently engineered by The Initiatives, an ultra-evil cabal that has Conrad, and by extension Victoria, by the round fuzzy ones.

Then there’s all the drama at the bar. Jack (Nick Wechsler) is going along with Kenny (JR Bourne) and they’re about to open even though it appears that Kenny’s suppliers aren’t all that above board. Well, we know there’s some sort of conspiracy behind Kenny’s help, we just don’t know what yet.

Amanda seems to have convinced Martin that she’s who she says she is, and also leads Martin into finding Gordon’s cold, dead body in a travel trailer with one of Conrad’s cufflinks next to it. Charlotte (Christa B. Allen) decides to help out at the bar rather than go to the wedding, and it looks like she and Declan (Connor Paolo) are re-connecting.

Conrad gives Victoria a gun for a wedding present so that she can protect herself, little knowing just how badly she might need it. See, not only is Conrad getting fingered for Gordon Murphy’s death, there’s even more skullduggery ahead, especially after Conrad gets arrested at the wedding for Murphy’s murder.

Nolan, in the meantime, has figured out that his new girlfriend and CFO Padma (Dilshad Vadsaria) was scoping out Grayson Global, trying to figure out David Clarke’s ties to NolCorp. So I guess he’s suspicious, but still wants to work with her. It doesn’t make sense.

Martin confronts Victoria about her faked kidnapping (never a good idea) and Victoria just happens to let it slip that Emily was in juvenile hall. Kara, who has finally found out about Gordon while at the bar’s re-opening, also confronts Victoria, who lets Kara know that she doesn’t quite trust her.

Ah, while Conrad is in his holding cell, he gets a visit from The Initiatives rep and it’s clear he’s going to have to do something really nasty again for them, even if he doesn’t know what it is. Daniel takes advantage of his father’s arrest to further conspire with Aidan and take over Grayson Global, but they don’t have to do it just yet – something there’s even odds they’ll regret.

Now, there was one scene that was played nice and appropriately slowly – when Jack proposes to Amanda, which was just so sweet. Because Amanda really does love Jack. However, the scene also did something else. It reminded me that Jack’s boat The Amanda ends up at the bottom of the ocean at some point or other, because that’s how the season started.

Aidan and Emily end up together talking over everything that’s going on. Emily doesn’t exactly trust Aidan and he concedes that everyone she has ever trusted has betrayed her in one way or another. However, he says he has changed. Emily still sends him away, even as he declares he’s not giving up on her.

As Emily goes into her end of episode voice over, Mason is tying strings and it sure looks like he’s figured out who she really is. The question is how scary is that? The thing is, there was a dead body in the sunken boat at the beginning of the season, we just don’t know whose? Anyone want to put some money on it being either Aidan or Martin?