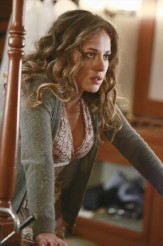 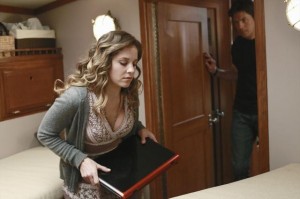 At last, at last, we get to find out who died when the Amanda went down, as we saw in the season premiere of REVENGE. And, in fact, “Sacrifice” starts as it did at the beginning of the season, with the divers and the hand with the wedding band. Now, I have been writing all season that I thought it would be Aidan (Barry Sloane). It made sense, since Aidan clearly was begging for trouble. Plus it would have cleared the decks for Emily (Emily VanCamp) to go after Jack (Nick Wechsler).

I am not, however, grumping because I was wrong, because I didn’t really want to be right, not because I like Aidan, but because I don’t like predictability. So when I noticed the wedding band at the beginning of the episode, I realized that Jack was wearing one. But then I saw that so was Nate (Michael Trucco). But Aidan wasn’t. So I knew they weren’t going to kill off Jack (well, was 90 percent sure), the wedding band meant that it was Nate going down. Which meant that I had to sit through the rest of a rather unremarkable episode waiting for Nate to start his swim with the fishes.

Feh. Because the rest of the episode is Conrad (Henry Czerny) and Victoria (Madeleine Stowe) trying to cover up that she killed the evil Helen Crowley – in self-defense, really – while Daniel (Josh Bowman) freaks out. Then Conrad siccing Ashley (Ashley Madekwe) on Amanda (Margarita Levieva) and all that stuff.

Emily hands Padma (Dilshad Vadsaria) off to Aidan because he knows what it’s like to be manipulated by the shadowy evil cabal that is The Initiatives, since his sister was murdered by them. Padma wants proof positive that her father is alive before she’ll hand over the Carion software that Nolan (Gabriel Mann). Ashley tells Emily that Amanda blackmailed Conrad.

But see, Amanda still has Emily’s laptop, which she did use to blackmail Conrad into giving Jack his bar The Stowaway back. So now Jack and Amanda are stuck on the boat with Nate, who has resolved to get the laptop back and remove them in order to get Conrad’s help to rebuild the Montauk waterfront. Amanda, however, is not one to go down without a fight and she tells Jack that they have to kill Nate before he kills them.

Nate does get a chance to let Conrad know that Amanda still has the laptop, but that he has Amanda. So Victoria drops by The Stowaway where Charlotte (Christa B. Allen) is baby sitting Jack and Amanda’s baby, ostensibly to invite Charlotte to the big Labor Day party where Conrad will announce his candidacy. Okay, maybe that was part of it, but Victoria also takes advantage of the situation to slip some evidence from Helen’s killing under Amanda’s bed.

On board the boat, Amanda and Jack manage to get Nate distracted enough to float the life raft, but Jack gets shot by Nate while getting off the boat and Amanda makes a point of staying behind, then arranges to start the boat sinking from one of the bilge holes in the bottom. At the same time, Emily and Nolan realize that Nate’s on board the boat with Jack and Amanda and that means trouble, so now they go off in another boat looking for them.

Funny how Mr. Trask, whose face looks strangely like he’s had way too much plastic surgery, shows up at the big Labor Day do to ask Conrad and Victoria what happened to Helen. Funny how conveniently Conrad dumps everything on Amanda. Emily and Nolan find Jack floating along, transfer him to their boat, then Emily insists on taking the life raft to save Amanda and sends Nolan off to take Jack to the hospital. Trask just happens to find the evidence under Amanda’s bed that Victoria planted, and finds out that Padma has left Helen a message. Which means Padma gets the nasty finger in the box – well, I’m guessing that’s the proof that Trask is offering. You know it’s pretty nasty, whatever it is.

Emily gets on the boat with Nate and Amanda, and in the ensuing fight, the propane tanks start leaking and Nate blows the boat up with himself still on it. Emily and Amanda narrowly get off and make it to the life raft. But Amanda has been shot, too, and dies in Emily’s arms to a couple of flashbacks from their mutual past before they exchanged names. With Jack in the hospital, Nolan goes back to find Emily, but before he does, Emily has to let Amanda sink and it’s all very sad.

Okay, I didn’t expect Amanda to die, but figured that the producers were going to have to find some way to get rid of her because we all know that Emily is in love with Jack. It’s also pretty convenient that the person that The Initiatives think is behind killing Helen and all the trouble the Graysons have been facing is Amanda and now she’s dead, which will also give Emily lots of room to go after the Graysons again. After all, she’s blaming Amanda’s death on them for some reason. So we’re back to business as usual on the show.