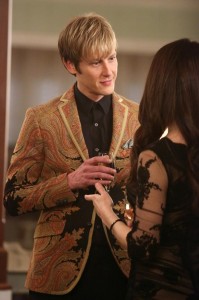 On REVENGE, the complex love-money-retribution drama now in its second season on ABC on Sunday nights at 10, Gabriel Mann plays Nolan Ross. Nolan is a complicated young man who – when they’re speaking to each other – tries to help heroine Emily Thorne (Emily VanCamp) avenge the death of her father and other wrongs she perceives to have been committed by the wealthy Grayson clan. Nolan has had a tough year, what with losing his corporation and having his girlfriend kidnapped and murdered, but it sounds like the worse things get for the character, the better actor Mann likes it.

Mann, originally from Vermont, has a long list of credits that include an arc on MAD MEN and a character, Danny Zorn, who appeared in both THE BOURNE IDENTITY and THE BOURNE SUPREMACY. At a party thrown by ABC for the Television Critics Association, Mann talks about his current gig.

ASSIGNMENT X: How do you see Nolan?

GABRIEL MANN: My take on Nolan is just, I feel for him. I have an empathy for this guy, because I think we all can identify with what it means to be lonely and sort of not have the things in our life that we want. And what happens when some of the things you strive for you get, and then still it’s not enough? So with Nolan, it’s always a process of, how do I fill in the gaps, whether for love or success or recognition or money or romance or whatever. And I find that he is both sides of the coin. He can be very dark and destructive and dangerous, and he can be very wounded and hurt and empathetic. So that’s what I like about him – that I can go from having a very nasty moment with somebody to having my heart broken within the space of fifteen minutes. I feel like the people that he genuinely cares about, he will go out of his way, sometimes in a very awkward, unsuccessful way, to try to help and/or advise. I feel like his advice comes from a truthful place, but the second I ever think anything is true on this show, it turns out it’s the opposite. So there’s a part of me that also feels like maybe there’s a hand that Nolan hasn’t been dealt yet that none of us know about.

AX: Nolan has mostly been there for Emily, no matter how extreme her schemes get. Do you ever think he might hit a point with Emily where he’s so irate that he might jump ship entirely?

MANN: Yes. Yeah, I do. It’s the nature of a dynamic relationship that is based on very high stakes, and there are huge emotional consequences. And I’d like to think that Nolan, in his heart, is enough of a human being that he would know when to step away from the fire, and/or to turn around and fight back.

MANN: It’s crept into my daily dialogue at this point. I love these writers. I would have never in a million years [thought of the phrase], “What’s the revenge-enda?” We play with the conceits and concepts and the language of these characters, and Nolan’s definitely got a pretty clear voice at this point. So there will be many more double entendres and Snark Central coming.

AX: Do you get to make suggestions about what Nolan would or wouldn’t do or say?

MANN: Yeah, absolutely. In fact, [the producers/writers] were very kind this year and gave me all of the things that I asked for in terms of my Nolan suggestions.

AX: How far ahead of shooting do you get the episode scripts?

MANN: Last year, it was the day before we started shooting, we wouldn’t know anything beforehand, and this year, they give us two days before we start shooting as opposed to one. I think that was partly because the plot twists were coming so quickly that the writers were literally hanging onto their own seats. Past that, I wonder how much of it was, they were afraid we would open our big mouths. So they didn’t want to tell us anything.

AX: A serious question – is there a big difference for you whether you get the script one day or two days? What does getting that second day give you time to do?

MANN: Learn my lines a little bit better [laughs]. No, the more time I have with the script, the more Nolan-y I can make it, although I have so – he’s become so internalized in me at this point that usually upon reading the lines for the very first time, I’m like, “Okay, there’s Nolan’s voice, I know exactly how to say that.” It just gives you a little more time to connect all the dots to everything that’s happened before in a way that will make it more effective in how I play it and what will happen next.

AX: Was there a specific moment where you realized, “This show is a hit”?

MANN: Yes. When Stephen King said that he liked the show and he thought Tyler [Ashton Holmes] was one of the best villains on television, I thought, “Okay, we’re good.” That was fairly early in our first season and it still shocks me that it was that wide-reaching and that even people responded to it in a way that I wouldn’t have expected certain people to like this type of show.

AX: Were you prepared to be on a TV series that had this kind of success?

MANN: I don’t think anyone could be prepared for that. I think when you sign onto any kind of job, the initial impulse is just a character that intrigues you. And so that was really my modus operandi for coming into the show was, I thought there could be some real possibilities with this guy and some room to play. That the show was received in the way it was and that it has built in the way it has and that people care enough to be interested and get very, very obsessed with it is sort of frosting on the cake, to a certain degree. But it’s much more fun to be involved with something people are talking about than something people will never see. That’s the bottom line.

AX: Do fans mostly love you or love to hate you?

MANN: Absolutely both. As long as it’s not a mediocre reaction, let it be as extreme in love or hate, just not in the gray area.

AX: Do you get reactions from people on the street?

MANN: Well, it’s funny. I shot over the hiatus – I was in Mexico, I did a film, I forget the scope of the show [REVENGE, which is] all over Mexico. I think down there it’s VENGENZO. So when I first got into town, I kept hearing people say, “Vengenzo! Vengenzo!” It was like, “Oh, hello …” “Vengenzo!” And finally, when a few people finally started coming up and saying, “Nolan!”, I thought, “Oh, REVENGE is in Mexico. I got it.” The reaction has been great. I get a lot of, “I wish Nolan were my best friend,” or “Will you marry me” sort of stuff. I was like, “I’m flattered, but really? You want to marry Nolan? Do you know what you’re getting into with this situation?” But it’s still a little bit of a quandary to me, how and why people have responded to him the way they have. I know he can be funny. I know he can whip off a one-liner and it’s great to make people laugh, but past that, he’s a pretty odd guy.

AX: Does knowing that the truth can turn out to be the opposite of what seems to be happening in REVENGE put any particular challenge on you to play Nolan?

MANN: No, because I think coming in to this character, one of the things I really wanted to try to accomplish was to leave as much open as it is possible, because I guess having come from the film world prior to being in television and knowing that you sign a contract that, if people like the show, will potentially keep you on with that show for quite a while, I didn’t want to shut any doors, so part and parcel of that was that anything could then happen, because of the way the character was established. So when they do throw a curveball at me, I kind of took them down that garden path to begin with. And it’s what keeps it fun and interesting for me as an actor, if this is something where we’re so lucky as to continue for a number of years, will make it fun.

AX: Do fans want to see Emily and Nolan get together romantically?

AX: How is working with Emily VanCamp?

MANN: I love her to death, I love sort of torturing her with my Nolan stuff. I will try and make her break character, I will try and make her laugh always – I couldn’t ask for a better acting partner, honestly. She’s been doing it for so long, she’s such a pro, it’s just innate in her. She will get a script, she will then have to speak Japanese, she will have to ninja-fight and there’s never a complaint, she’s usually got just a day to learn it, and she shows up and she does it flawlessly every time. I said to her – I was watching her and Nick do a scene on the monitor, and I just went up to Emily afterwards and said, “You inspire me to want to bring my best work to this show and I am so grateful for you and our friendship and that you get to be my acting partner, because you make me better.” So I couldn’t wish for anyone better.

AX: What’s the film that you did in Mexico?

AX: What kind of character is John Malkovich playing?

MANN: John Malkovich’s character is the nemesis of Cesar Chavez, and being his son, I would say maybe I fall into the nemesis department as well. I have learned much about the history of grape-growing in the process, and the hell that the workers were put through with no protections, no rights, and I thought it was a very timely story for the world we live in now that’s filled with union-busting and trying to take away workers’ rights, so I thought in many ways this was the perfect time for that story.

Ironically, when I had signed onto the film and I called my mom to tell her I was going to do it, she said, “Well, you know my history with Cesar.” I said, “No, in my forty years, you’ve never mentioned your history with Cesar Chavez. What’s your history?” And she said, “Well, I used to …” When she went to Stanford, she used to canvas for Cesar Chavez for his meetings to rally the workers to come, and she said, “Whether you want to or not, you’re doing this film.” I was already doing it, but it was an interesting, little-known fact about my mom’s history, so that was a nice added impetus to jump on board.

AX: Is there anything else you’d like to say about REVENGE right now?

MANN: I think it’s a fun place for actors to come and get their kicks, get their dirty REVENGE kicks out. And then you don’t have to do that stuff in your real life. It’s amazing how cathartic it is, being a part of this show.