The actor talks about playing Conrad Grayson in Season 2 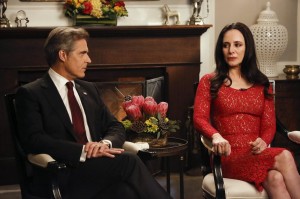 As REVENGE heads into its two-hour second-season finale, Sunday May 12 at 9 PM, Henry Czerny’s character Conrad Grayson has a lot going on. First of all, he’s still one of the targets of retribution by Emily VanCamp’s character Emily Thorne – who is about to marry Conrad’s son Daniel (Joshua Bowman). Second, Daniel wants to take his money out of the family business and move with his new bride to France. Third, Conrad is running for governor of New York and his opponent is running a dirty campaign. Fourth, Conrad’s wife Victoria (Madeleine Stowe) is angry with him, and she is exactly the sort of person you don’t want to have as an enemy. Fifth – it’s the season finale, so things are doubtless going to get worse for everybody before they resume in Season 3 (ABC has announced that it has renewed REVENGE).

Czerny (pronounced “Cherny”), who hails from Toronto, Canada, played Norfolk in THE TUDORS and has an impressive list of film and TV credits. Right now, he’s poised to leave a party ABC is throwing for the press in order to take his son to a Barenaked Ladies concert, but he pauses for a brief chat about Conrad Grayson and REVENGE.

AX: When you started working on REVENGE, did you have any idea that you were going to become a cult figure?

HENRY CZERNY: You mean the character or me?

AX: You as the actor who plays Conrad Grayson.

CZERNY: No. And if I am, then I need to do some more reading of magazines. But no, I didn’t know. I joined on because I think it’s a sexy show and it talks about the layers of different kinds of personalities that we all are.

AX: Did you know or at least suspect how dark the show was going to get?

CZERNY: Yes. I was kind of hoping to become as complex and as entertaining as it is, “complex” being the first element.

AX: What can you say about how Conrad deals with troubling situations?

CZERNY: I think he gets deeper and deeper into his default behavior and I think the revelation to himself about his behavior is a long way off. I think the harder things get, the more manic he becomes, the more successful he becomes in response to imminent demise.

AX: What’s been the trickiest thing about playing him so far?

CZERNY: The trickiest thing about playing Conrad Grayson is his inability to recognize the damaging – the collateral damage that he effects in pursuit of protection/survival.

AX: Through your career, you’ve played a lot of characters who are very damaged. Are you drawn to these characters?

CZERNY: Yes, I am. I always have been. I’m drawn to the layers underneath the façade. And this [Hollywood] is a great town to be in if you’re after that, because we have people mutilating themselves beautifully to appear as though they’ve never had a difficult moment in their lives. And yet it’s only when you explore those difficult moments that you actually get over the hurt. And so that’s what fascinates me, is people who haven’t dealt with their hurt.

CZERNY: I have a family, and that’s pretty much the biggest, most complex and beautiful project that I can imagine.

AX: Anything else you’d like to say about REVENGE?

CZERNY: It’s a blast with this cast.