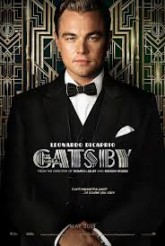 Make that the visually stunning yet not very emotionally engaging Gatsby

F. Scott Fitzgerald’s THE GREAT GATSBY, originally published in 1925, is generally considered to be one of the Great American Novels and a brilliant look at the Jazz Age in which it was written. It has been adapted for both film and television before, but director Baz Luhrmann, who co-wrote the screenplay with Craig Pearce, felt he could put his own idiosyncratic stamp on the material. In this, Luhrmann has succeeded; most filmgoers, even without reading the credits, will readily recognize Luhrmann’s aesthetic throughout, particularly in the eye-popping, frenetic party scenes. The filmmaker even does a good job with 3D – GATSBY doesn’t strictly need it, but the format is used wisely and well.

The problem here is one of emotional tone. GATSBY is a story of deep, transformative yearning clashing with convention, snobbery and superficiality. Leonardo DiCaprio, who plays Gatsby, conveys the man’s determination very handily, but what we don’t get from him is a sense that he is utterly undone by Carey Mulligan’s Daisy. Likewise, no matter how much the voiceover insists on it, Tobey Maguire’s narrator Nick Carroway never seems like his view of the world is being shaken to its foundations by his exposure to Gatsby. Without these underpinnings, we get something that is gorgeous, energetic and ultimately effective depressing, but it’s never actually moving.

Luhrmann and Pearce give their GATSBY a framing device that takes place after the stock market crash of ’29 (Fitzgerald’s novel was published years before that financial catastrophe occurred). Nick has suffered a nervous breakdown and his doctor (Jack Thompson) suggests writing as a form of therapy. Nick winds up writing about his neighbor in 1922. Nick has moved toLong Island,New York, from theMidwest and gets a little cottage that is next to the enormous mansion of the mysterious Jay Gatsby in the new money neighborhood. Just across the bay is the old money neighborhood, where Nick’s cousin Daisy Buchanan and her husband Tom (Joel Edgerton) reside. Nick reconnects with Daisy and is befriended by Tom. This makes Nick uncomfortable, as Tom drags Nick along to meet Tom’s married mistress Myrtle (Isla Fisher). Nick becomes increasingly fascinated with the enigmatic Gatsby, who throws enormous parties but seldom meets his guests. Then Gatsby invites Nick to one of the parties. Gatsby, it turns out, knows Daisy from years ago, and he’s been throwing the lavish parties in the hopes that she’ll turn up at one of them.

This is one of those instances where the original has inspired so many variations through the years (it’s easy to see the influence of the basic story in plenty of other works that aren’t remakes) that revisiting the story makes it seem at once over-familiar and oddly rushed, even with a nearly two-and-a-half-hour running time. Nick keeps telling us over and over how real, sincere and optimistic Gatsby is, in marked contrast to everyone around him. Gatsby definitely is those things in contrast to Tom, but Tom isn’t just shallow – he’s a hypocrite, a brute, a racist and generally an old-moneyed thug. We don’t actually see enough of the rest of the world in focus to know what the rest of the crowd is like. More troubling is that we never see a spark between Nick and Gatsby to make us feel Nick’s admiration, much as the narration goes on about it. Likewise, DiCaprio’s Gatsby is so assured that it’s much harder than it should be for us to believe that everything he does is for love of Daisy.

In THE GREAT GATSBY, Fitzgerald was condemning a culture in which appearance was everything. It’s a little ironic, then, that visual appearance here, especially Catherine Martin’s fabulous production design, is the main reason to see the film. We see and hear emotional signifiers, and the story is heart-tugging, but it’s all so shiny and stylish and generally concerned with sight and sound that we seldom get a chance to actually feel anything for the characters. This rendition of THE GREAT GATSBY is certainly worth seeing, but don’t expect a greatly emotional experience.