Home » glee season finale all or nothing 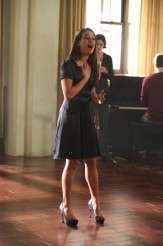 A very anti-climactic season finale. Where does GLEE go from here? 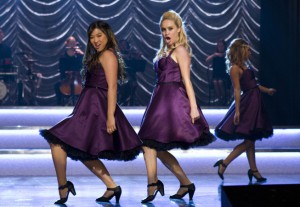 Jenna Ushkowitz, Becca Tobin and Vanessa Lengies in GLEE - Season 4 finale - "All or Nothing" | ©2013 Fox/Adam Rose

Well, that was a big pile of nothing. The GLEE Season 4 finale “All or Nothing” is about as anti-climactic as they come. It feels like a series finale after everyone involved with the show has given up, not a show with two more seasons committed to it.

The joyous, cool and innovative GLEE, has turned into a cold, calculated and callous series this season that continues to change characters and their motivations at their whim and in the case of this season, had no idea what to do with the new characters on the show.

“All or Nothing” finds New Directions at Regionals and, no surprise here, they actually win. And that’s how the season concludes.

It’s very strange. Along the way, we get a Brittany (Heather Morris) revelation – she’s actually a genius and has been accepted in MIT. This turns her into a walking egotistical nightmare. I hate when the show “changes” character personalities just to wring some kind of laugh out of it. It doesn’t work.

We get the revelation of who the Catfish is that Ryder (Blake Jenner) has been chatting with online. “Katie” at first appears to be Marley (Melissa Benoist). She admits it’s her, but the truth is, it’s Unique (Alex Newall), which pisses off Ryder. It’s been a weird season on GLEE where there’s been a ton of unrequited love going on. First, Tina (Jenna Ushkowitz) had a thing for Blaine (Darren Criss), but since he’s gay, it would never work out. Meanwhile Blaine had a crush on best friend Sam (Chord Overstreet), but he’s not gay. And now Unique, who is gay, has a crush on Ryder, who isn’t. Got it?

I’m all for mixing things up on the show, but really – telling essentially the same storyline three times? It’s a bit lazy on the writing side. And the motivation behind Unique liking Ryder really comes out of left field anyway.

These ridiculous storylines interfere with the musical numbers, which at this point really are losing all of their spark.

Oh, and why didn’t they resolve the Becky (Lauren Potter) with a gun storyline? Huh?

The only interesting part of this episode is Rachel (Lea Michele) getting a chance to do her final audition for FUNNY GIRL. Now that feels satisfying, but having Rachel so isolated in New York this season, really felt like a major disconnect from the rest of the series. New York and Lima just doesn’t hold together that well as a story mechanism. Hopefully next season it gets resolved.

Blaine is still gung ho about proposing to Kurt (Chris Colfer), and he gets some coaching from an elderly lesbian couple (Meredith Baxter and Patty Duke).

With two more seasons to go for GLEE, I hope the creators have a major game plan for bringing back the magic. The show deserves some kind of driving focus and something that doesn’t seem repetitive. They’ve exhausted just about every storyline they can at Lima, so maybe choosing one story path or another is the way to go.

That said, with so many new people added to the mix, there are some cool people I would like to see more of. Ryder, should be gone and it was hinted as much at the end of this season. Marley, I’ve always felt had potential, even if they saddled her with silly storylines. Jake (Jacob Artist) is also a strong character as well. In fact, if they started writing Unique as Unique and not as a Mercedes clone, that character would be interesting too. I also think Kitty (Becca Tobin) has grown on me now that she’s no longer an uber bitch.

As for the old cast, I’m not sure what could be done to keep them intact, because many of their storylines are not that interesting. It’s Rachel, Kurt, Finn, Puck and Santana that still feels like they have a little life left in them.

Clearly Fox has faith that GLEE can continue with a two year season renewal, but until we see what’s in store for the show next fall, whether it can survive for two more seasons and still be entertaining and relevant is still to be determined.