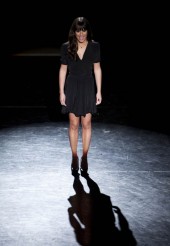 Another crappy episode, with one major bright spot 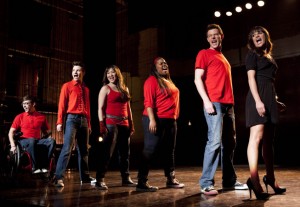 After last week’s devastatingly tasteless and offensive “Shooting Star” episode which dealt with the issue of a school shooting (without having anyone do any shooting, a gun merely went off), GLEE tries to get back on track with “Sweet Dreams” with mixed results.

The problem is, once you go down a dark road like last week, when you try to make light of the situation the very next week, it comes off as callous, crass and harsh. In fact, the school shooting was reduced to a silly recap at the beginning of the episode, which pissed me off all over again.

“Sweet Dreams” is another one of those all over the place episodes. It deals with McKinley High trying to figure out what to sing at Sectionals. Mr. Shue (Matthew Morrison) wants to do oldies but goodies, while Marley (Melissa Benoist) wants to push her original songs as a way to make an impact at the competition.

Meanwhile, Finn (Cory Monteith) is now at college trying to get his teaching degree and hooks up with Puck (Mark Salling) who isn’t enrolled and merely exploiting loop holes in the college situation. He starts living out the crazy college dream of partying and blowing off school work. This utterly useless and brief subplot is resolved within the hour when Mr. Schue forgives Finn and asks him to come back to Glee club to co-teach it with him.

And in New York, Rachel (Lea Michele) auditions for a Broadway revival of FUNNY GIRL and does a solo version of “Don’t Stop Believin’” for her audition.

Surprisingly, the “Don’t Stop Believin’” moment is one of the more emotional ones of this episode. It reminds us why we like the Rachel character so much. Too bad they’ve spent so much time this season  turning her into a complete neurotic basket case.

As for the dealing of the school shooting aftermath,  Blaine (Darren Criss) starts to sense that Becky (Lauren Potter) knows more about Sue (Jane Lynch) being kicked out of the school than she’s leading on.

Otherwise, another big bore of an episode. With the announcement that the series has been renewed for two more years, I certainly hope the series has some big surprises in store to set up Season 5 in a way that’s more satisfying than this dog of a year (that’s what Murphy is promising, we can only hope).

Poor song choices throughout this season, an unbearable preachiness and the inability to figure out what to do with any of the main characters, makes GLEE one of the most frustrating series on network TV. When it gets it right, it can be phenomenal, when it derails, it’s a deadly pile-up that, sadly, you can’t help but watch even if you know better. “Sweet Dreams” clearly falls in the latter.