More heavy-handed themes, but it still has its moments 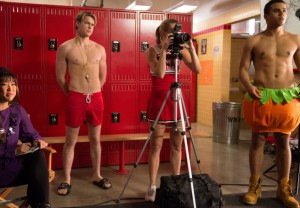 GLEE continues to prove why it’s more interesting to follow the characters at McKinley High than the New York storylines. Once audiences warmed to the new characters and dynamics at McKinley, it’s become very difficult to even care about Rachel (Lea Michele) and Kurt (Chris Colfer) as they’re living out their dreams.

“Naked” is one of GLEE’s heavy-handed episodes that hammers home its title theme “naked” with varying degrees of success and failure.

The biggest “naked” story comes from Rachel getting offered a role in a student film where she has to take off her clothes. She wants to do it, in order to grow up, and it results in a solid musical number “Torn” where she sings opposite her current Rachel self and the old Rachel. The storyline itself gets a little preposterous when Santana (Naya Rivera) and Quinn (Diana Agron) show up to do an intervention. They really are stretching in an attempt to bring back original cast members.

Meanwhile, back at McKinley, the Glee club is back in the competition now that it’s been discovered the Warblers used steroids to enhance their performance. Now they need money to travel to Regionals which results in a beefcake calendar shoot with all the boys in New Directions.

This brings out various emotions in many of the students, and it even pushes Sam (Chord Overstreet) to the limits as he realizes his grades suck and needs people to see that he has a great body to overcome his “trouty mouth”.

Finn (Cory Monteith) also has a major one on one battle with Sue (Jane Lynch) over the “pornography” of the calendar, but discovers Sue once did a spread in Penthouse and threatens to uncover it if she doesn’t back off.

Marley (Melissa Benoist) still has feelings for Jake (Jacob Artist) and the two of them finally give in and admit they love each other – more “naked” subtext about shedding barriers and being nakedly honest.

Perhaps the most surprising thing about the last few episodes is how much I’ve liked Finn taking over the Mr. Schue (Matthew Morrison) position as Glee club teacher. It’s refreshing and it works almost too well.

Tina (Jenna Ushkowitz) has also finally broken out as a stand out performer after four years on the show. The writers are giving her a nice anchor and some stuff to actually do. I always liked Ushkowitz, but Tina was always underwritten. Now, she’s in the foreground, especially with her unrequited love for Blaine (Darren Criss) percolating under the surface. She’s taken over the “let’s get this done” attitude of Rachel, but without any of the self-serving ego of that character.

The last couple of episodes have also engaged in some really interesting directorial flourishes – pushing GLEE in different directions and different styles. It’s refreshing to see the series continually trying to freshen up the show’s presentation.

Song-wise, the show has been suffering as of late, though Michele’s rendition of “Torn” was perfection.

GLEE is perhaps better this year because it has new faces we like and a more streamlined storytelling structure. Even if the New York stories are falling flat, at least the show is still tolerable and still pretty enjoyable to watch. How the series is going to reintegrate Mr. Schue and some of the other M.I.A. cast members who have graduated is still a mystery, but for now, this is working. Let’s hope it stays that way.