Another year, another GLEE Christmas episode - at least this one is decent 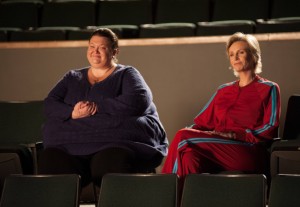 Is it me, or does it appear that GLEE may actually be building toward a Season 5 (if there is one) where NYADA becomes the new “Glee Club” and McKinley high is completely torpedoed?

There are some clues, particularly with Rachel (Lea Michele) and Kurt (Chris Colfer) there, and the hint that Blaine (Darren Criss) will be applying to NYADA as well.

We’ll see how everything lines up. GLEE certainly has had an identity crises this year moving back and forth between New York and Ohio, but if they can’t get these two storylines working properly, it may be best to commit to either or in the near future.

As for “Glee, Actually”, this is the official Christmas episode, which, surprisingly is airing before Christmas, unlike the GLEE Thanksgiving episode that aired after Thanksgiving.

In a nod to the film “Love, Actually”, several micro-stories are told which leads everything being wrapped up in a tight little bow at the end.

This is definitely a far superior episode than last year’s dreadful Christmas episode, but it still has some issues.

The best of the stories is Artie (Kevin McHale) wishing, ala IT’S A WONDERFUL LIFE, that he was no longer in his wheelchair. Filmed in black and white, we see how horrible things turned out for all the students, because Artie is the glue. Wait a minute, wasn’t Marley the glue last episode? And wasn’t Finn the glue a few episodes back?

Even though some of the alternate universe tweaks are a bit of a stretch, it still is quite clever (plus we get Mr. Schue’s wife (Jessalyn Gilsig) back for a hilarious cameo). I wouldn’t have minded if an entire episode was devoted to this segment alone. We even get long lost Rory (Damian McGinty) showing up as his spirit guide (or something like that).

The worst of the segments is Sam (Chord Overstreet) and Brittany (Heather Morris) professing their love for each other, especially since they both believe the Mayan calendar is correct and the world is going to end. So they decide to get married and then when the world doesn’t end, they’re shocked. The good news, the wedding wasn’t official.

My problem with this segment is that I can buy that Brittany is that dense, but Sam is so much smarter than this. It’s almost out of character. And I’m still confused 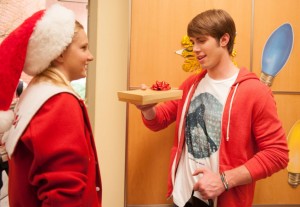 Oh, but this is GLEE. Everyone gets a chance to be out of character at some point.

Other stories include Kurt and Blaine reuniting in New York (with a plane ticket help from Kurt’s dad) while Puck (Mark Salling) and Jake (Jacob Artist) decide to become real brothers by getting their different mothers together to make peace with the deadbeat dad that left all of them behind.

Finally, Sue (Jane Lynch) ends up finding the spirit of Christmas (again, again!). She’s involved with the faculty secret Santa, and ends up picking Mrs. Rose (Trisha Rae Stahl), Marley’s overweight mother. Sue finds out that Marley and her mom are broke and does a little Sue magic to make sure the two of them have a great Christmas.

While the Christmas song choices are a bit bland and over-produced, the stories themselves are pretty good. GLEE still has this horrible problem of meandering all over the place, and this episode is no different, except they acknowledge their meandering way too much.

That’s another somewhat annoyance with GLEE, is that it is often way to meta for its own good. It acknowledges when it makes terrible mistakes with stories or characters and has a Greek chorus of characters to point it out. Sue literally mocks the structure of this episode in the opening scenes, so, the series loves to take meta to the extremes. Some times it works, other times, you wish they would solve the story problems ahead of time, so they don’t need to back pedal later to acknowledge how crappy they were.

Yet, that’s the beauty of GLEE. You never know what you’re going to get. Sometimes it’s chocolate and candy canes, other times it’s coal. This year, thankfully leaned more on the sweet side.