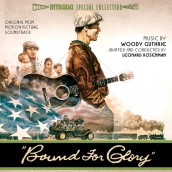 Of the major soundtrack labels specializing in retro releases, Intrada might have the quirkiest tastes in taking chances on catalogue titles, especially when it comes to movie with a surfeit of songs that might not necessarily appeal at first to score fans. But then, how can you go wrong when those freewheelin’ political tunes are by Woody Guthrie, in the personage of David Carradine in the film BOUND FOR GLORY.

An actor most popular in pop culture for wandering the west and kicking ass along the way as KUNG FU master Caine, Carradine got the role of a lifetime in Hal Ashby’s 1976 biopic about the iconic folk singer’s travels across Depression-era America. And damn if Carradine couldn’t carry any number of classic guitar tunes from “This Train is Bound for Glory” to “So Long It’s Been Good To Know Yuh” and “Talking Dust Bowl Blues.” And while his voice is country pleasant, Carradine incisively cuts to the lyrics’ ironic core for his ballads about the have’s and have not’s, songs have definitely remained the same these days.

But for all of its powerful strumming, BOUND FOR GLORY is also notable for winning Leonard Rosenman his second Oscar for Best Adapted Score, an award he’d last claimed for the classical music in BARRY LYNDON. A composer whose revolutionary blend of dissonance and melody first smashed onto film screens for the storm-tossed rocks of Monterey Bay in 1955’s EAST OF EDEN, Rosenman was right at home in the 1930s American wasteland. His score here is a modernist mixture of tempestuousness and lyricism, from wild flights of harmonica and a stormily percussive orchestra to beautiful string passages that seamlessly swing from Guthrie instrumentals to Rosenman’s spiritually akin original material. Aaron Copeland is also very much part of Rosenman’s work here for music that could easily accompany a tone poem about Billy the Kid.

But perhaps Rosenman’s most powerful scoring here is for Guthrie’s “This Land is Your Land,” as a jamboree of banjos, fiddles and harmonica build to take on stirring symphonic power that’s enough to make you salute. Score fans should consider it their patriotic duty to pick up a copy for this rendition alone, though Intrada’s sparking presentation of many unused Rosenman cues (complete with his trademarked finale “tone pyramids”) make it more than worth their while.