Another awful episode, and they sing WHAM. Run, run for your life. 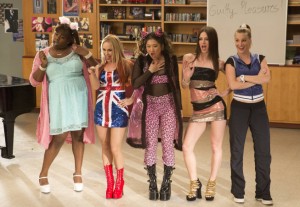 Let’s just face it – GLEE is running on fumes. Story has become secondary, almost arbitrary and now the show feels like it only exists to sell songs and CDs.

The storylines have become ridiculous during the second half of the season, the transition with the graduating glass (most of them conveniently enough in New York) and the remaining McKinley High students has been awkward and the characters continue to do things that make no sense whatsoever (Finn kissing Emma, huh?).

“Guilty Pleasures” is yet another in a long stretch of unbearably dull episodes that desperately treads water. Mr. Shue (Matthew Morrison) has been suspiciously absent most of the season (I suspect Morrison was making a movie) and he’s absent once again in this episode, leaving the students to decide what to do. So they decide it’s time to do “guilty pleasures” week to pick songs and artists that are, well “guilty pleasures.”

The characters also reveal secrets to each other as well (but none are very revelatory).

The big thing that’s resolved is Blaine (Darren Criss) revealing his crush on Sam (Chord Overstreet). Thankfully, GLEE shows restraint in not having Sam reciprocate – instead, the resolution is handled in one of the series’ most honest and non-heavy-handed ways. A rare kudos in an otherwise dreadful episode.

One of the biggest, annoying subplots in the last few weeks involved Rachel (Lea Michele) and her new boyfriend, who just happens to be a gigolo. Ugh. Really. They’ve run out of Afterschool Special stories and now they’re trolling for male prostitute storylines. Rachel finally discovers this, but this subplot seems so mean and out-of-left-field that it’s actually rather pathetic in a show that’s went down some pretty pathetic detours.

While there is some guilty pleasure in watching GLEE itself, the magic and the spark seems to be dimming. If the series is to return for Season 5, I’m unsure of what exactly they’re going to do. Yet again, the series needs a major reworking to get back on track and with so many characters graduating,

With five episodes left, it’s clear there won’t be a wholesale turnaround, but maybe the show is building to some major reboot twist by the end of the season. The series certainly needs it – desperately, because if GLEE limps into Season 5, if it doesn’t do something drastic, next year, will definitely be its last.