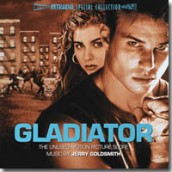 Jerry Goldsmith's TKO'd score is back in the ring

Jerry Goldsmith was arguably the greatest composer to hit Hollywood. But that didn’t mean he wasn’t capable of producing delightful cheese as much as he was a true masterworks. Case in point is his score for 1992’s GLADIATOR, an inner city boxing melodrama long forgotten in the wake of the Russell Crowe picture whose stakes were life and death. In this case, it was a TKO for Goldsmith when ROADHOUSE director Rowdy Herrington kicked his score to the curb in favor of Brad Fiedel, a composer whose electronic abilities were likely more “with it” than the veteran musical fighter.

Yet Goldsmith’s now-dated synths remain far more fun to listen to than much of the state-of-the-art electronic percussion we hear today, especially thanks to their spacey washes of melody, as evidenced in his used score to CRIMINAL LAW and similarly kiboshed work on ALIEN NATION. Perhaps it’s no surprise that the piano-based theme of NATION’s score also shows up here before finally finding a jazzier home in RUSSIA HOUSE. But while there are more than enough disco-ish pleasures to be found in GLADIATOR, what truly elevates this score into the “Why dump it?” zone is just how dynamically the orchestra is incorporated into the score, with strings and brass jumping into the ring with punch-happy pleasure. Goldsmith had a brassy, ballsy way with heroically bouncing sports melodies a la HOOSIERS.

And it’s hard not to envision Rambo breakdancing with a bazooka in hand when listening to the propulsive enthusiasm that Goldsmith gives to the material.GLADIATOR also legitimately stands out for its use of inner city, ethnic rhythms, gorgeously melancholy string melody and hep crime funk-jazz flavors, let alone the kind of sports movie nobility that filled the far more celebrated likes of RUDY. While GLADIATOR might not have the fighting weight of Intrada’s release of Goldsmith’s unheard, unused masterwork for TWO DAYS IN THE VALLEY, GLADIATOR is an infectiously fun bottle cap that’s worth getting for anyone in Goldsmith’s corner.

Clink on the link to buy the GLADIATOR soundtrack